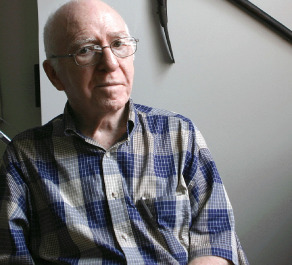 The Center for Migration Studies (CMS) would like to offer a forum to share tributes to and remembrances of our friend, mentor and long-time colleague Professor Aristide Zolberg, who passed away on April 12, 2013 at the age of 81. Professor Zolberg was a member of the International Migration Review’s (IMR’s) editorial board for the last two decades; a frequent contributor to IMR and other CMS publications; a leading participant in CMS conferences and a sage advisor over many years. A short summary of Professor Zolberg’s professional accomplishments follows. CMS welcomes additional reflections on the life and work of this titan in the field of international migration scholarship. To contribute, please submit your reflections via email to [email protected] and we will post them to this page.

Professor Aristide R. Zolberg was the Walter A. Eberstadt Professor of Politics and University in Exile Professor Emeritus at The New School for Social Research, founding director of the International Center for Migration, Ethnicity and Citizenship and a member of the International Migration Review (IMR) Editorial Board since 1992. Professor Zolberg or ‘Ary’ passed away on April 12, 2013 in New York City after a long battle with cancer. A short biography provided by The New School can be found here.

Aristide Zolberg was born in Brussels in 1931. He survived Nazi persecution under an assumed Catholic identity in Belgium and emigrated as a refugee to the United States in 1948. After attending Columbia University and Boston University, he served in the US Army in 1955-56, and received his PhD in political science at the University of Chicago in 1961 with a specialization in African studies. He initially taught at the University of Wisconsin, then at the University of Chicago, and moved to the Graduate Faculty of the New School in New York in 1983. In between, he held visiting appointments at the Institut d’Etudes Politiques (“Sciences Po”), the Ecole des Hautes Etudes en Sciences Sociales and the College de France, all in Paris, as well as the Institute for Advanced Studies in Vienna, the Salzburg Seminar, and the Norwegian Institute of International Affairs (Oslo).

Professor Zolberg was the author of several influential publications, starting with One-Party Government in the Ivory Coast (Princeton University Press, 1961; second edition, 1967) and Creating Political Order: The Party-States of West Africa (1966; reprinted 1985). Both were based on extensive field work in sub-Saharan Africa. After a decade of African research, he broadened his scope to the study of ethnic conflict, state-formation, and international migration; the results include Escape from Violence: The Refugee Crisis in the Developing World, co-authored with Astri Suhrke and Sergio Aguayo (1989) and, most recently, A Nation by Design: Immigration Policy in the Fashioning of America (Harvard University Press, Cambridge, MA; and Russell Sage Foundation, New York, 2006) and a collection of essays, How Many Exceptionalisms? Explorations in Comparative Macroanalysis (Temple University Press, 2008). Professor Zolberg was also a dedicated and significant supporter of IMR, contributing original scholarship and book reviews to the journal as well as conducting peer review of submissions.

In 1981, the French government awarded him the Palmes Académiques in recognition of distinguished service to French Higher Education. From 1983 to 1991, he held the University-in-Exile Chair established by the City of Berlin at the Graduate Faculty of the New School. In 2008, he received the “distinguished scholar” award from the Ethnicity, Nationalism, and Migration Studies section of the International Studies Association.

Professor Zolberg is survived by his wife, Vera Zolberg, Professor Emerita in the Department of Sociology at the New School; daughter Erica Zolberg and her husband, Allen Kelman; son Daniel Zolberg and his wife, Brenda Steiger Zolberg and three grandchildren Mika, Max and Leo Zolberg.

The New School for Social Research will hold a memorial event in Ary’s honor on September 19, 2013. Details will be posted at http://www.newschool.edu/nssr/.

“Ary’s passing fills me with sadness. A friend for decades, a man for all seasons, I can’t think of another scholar who I’ve more deeply admired, for so many reasons. For his incandescent intellect, his sharp wit and wry humor, his critical and creative acumen, his always principled example, his hunger for memory and thirst for justice, his profound understanding of exile, his nonpareil contributions (including his forthcoming autobiography Games of Identity, which reads like a novel)… even his baritone silver voice. His life enriched and inspired countless others. All of us who are in his debt will have what’s left of ours to pay it forward. He will be sorely and immensely missed.” – Rubén G. Rumbaut

“Dear friends and colleagues,
I join you in mourning the passing of this fine scholar and wonderful human being. His text Escape from violence remained a pillar of my course on refugee movements. Some years ago I had the privilege of sharing a conference in which Ary was one of the principal contributors. As always, he enriched us all, with sharp criticism but never a hint of personal animosity. He was, and remains in blessed memory, a treasure among us.” – Michael Lanphier

“Aristide Zolberg was an excellent scholar and a very kind person.” – Graziano Battistella

“I led off my review in Population and Development Review of Ari’s last book with the following statement. “Aristide Zolberg’s new book A Nation by Design offers the most comprehensive treatment of U.S. immigration policy ever undertaken and is a major piece of scholarship that will clearly prove indispensable to researchers for years to come. This achievement is no mean feat given the plethora of historical, political, economic, and sociological analyses of U.S. immigration. What sets Zolberg’s treatment apart is its unique historical depth and its realization of the importance of policies and practices other than those officially enacted by congress, the focus of most earlier historical work on immigration policy.” When the review appeared he emailed to thank me and say that among all the reviewers published so far, I had understood his book the best. It’s always nice to have such a collegial exchange with an esteemed colleague, so I was happy to hear from him. Then he wrote something initially perplexing to me. He said he didn’t remember if we had ever met, which was surprising since we had been at many conferences together. He then went on to say that he had recently had health problems that affected his memory. This was the first inkling I had that his health was compromised and it made me very sad. I wrote back and assured him that we had met and once again complimented him on the book. I was glad that he had at least lived to see the overwhelmingly positive reaction to his book, but feared he would not be with us too much longer. He will be missed, both as a person and a scholar.” – Douglas S. Massey

“It is indeed a sad day for all of us in the immigration community and beyond. Ruben expressed perfectly our feelings upon learning of Ary’s passing. We’ve lost a titan.” – Alejandro Portes

“Many of us knew Ary Zolberg to be one of the finest, smartest, funniest, bravest scholars we will ever know. This strikes a blow near the heart.” – Paul Spickard

“Ary Zolberg was an immigrant to the United States who became a major voice for the rights of immigrants and for a humanistic approach to immigration policy. I came to know him well – as a friend and colleague — through the Center for Migration Studies and also through our connection to the New School, where I taught many years ago. I well remember the discussions Ary and I had as he was working on what would become one of his masterworks, A Nation by Design. This book lays out what has become a standard way to think about immigration policy — as a means to produce a certain kind of nation. I also greatly appreciated Ary’s openness to considering religion as an important social factor in the migration and integration experience. I was a great admirer of this good man over the course of his long career. He was a constant source of support for our work at CMS. I know how much his friends and colleagues will miss him. My prayers and thoughts go out to Vera and to all of Ary’s family.” – Archbishop Silvano Tomasi

“On the few occasions I met Professor Zolberg before coming to CMS, I was struck by what an engaged and careful listener and critic he was. Early into my tenure at CMS, Prof. Zolberg kindly invited me to his home where I was able to tap his considerable expertise on a range of questions and issues involving the Center. He was a font of information, good ideas, and encouragement. It was particularly evident that he cared greatly for the community of scholars in this field. Beyond his own substantial scholarship, I know that he contributed very significantly and generously to the work of others, including through CMS and the International Migration Review, during his long, distinguished career.” Donald Kerwin

“Colleagues and friends of the International Migration Review have most eloquently described the profound and lasting impact of Aristide Zolberg’s scholarship, leadership, and mentorship in the field of migration studies. Drawing upon his written scholarship in my own writing and teaching was a transformative intellectual experience. His arguments and analysis provoked migration scholars to think in fundamentally different ways about migration processes (i.e., structures and relationships underlying forced migration or the layers of history of U.S. immigration policy). Evoking a reconsideration of perspective, and hence the ways in which knowledge about international migration is created, are the greatest gifts of a scholar – gifts which Aristide Zolberg shared without compromise. My personal memory of Ary Zolberg is a man who took great joy in the world around him. At a conference in Italy, he and I found we had a mutual interest in trekking in high places. With great wit, he told stories of climbing in the Dolomites which took some very amusing turns along the path. We found we shared an appreciation of the old rocks, young mountains of the Adirondacks. I was refreshed and inspired by how this giant in our field of international migration studies found energetic delight in following the trail to wild places and to mountain tops.” – Ellen Percy Kraly