For immigrants, advancing to more secure and permanent legal statuses is highly correlated with having health insurance. Data on health insurance and other factors that impact immigrant health are available in CMS’s health report and data tool entitled “Mapping Key Determinants of Immigrants’ Health in Brooklyn and Queens.” 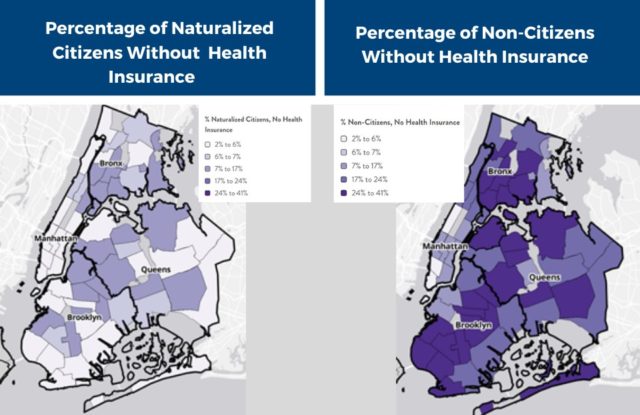 There are a number of hurdles to gaining coverage that put non-citizens and undocumented immigrants at higher risk of being uninsured. Most US residents are insured through their employers.  Non-citizens are more likely to be employed in the informal economy or in low-wage jobs, which typically do not offer health insurance. Even if an employer provides health insurance, it may be cost-prohibitive. Eligibility restrictions prevent undocumented people from accessing healthcare coverage through Medicaid, Medicare, CHIP or the Healthcare.gov marketplaces.

When compared to other developed countries, the United States has the highest rate of premature deaths from conditions that are considered preventable with timely access to healthcare. A study published in The Lancet estimated that a single-payer healthcare system (which provides universal coverage) would prevent approximately 68,000 deaths in the United States annually.

The NYC Care health access program provided by NYC Health + Hospitals provides low-cost and no-cost services to those who do not qualify for or cannot afford health insurance. This program is a lifeline for uninsured New Yorkers.

Prioritizing Citizenship to Heal from the Pandemic

CMS’s recent health study shows that lack of immigration status is highly correlated with a number of factors linked to poor health outcomes. These health determinants include lack of health insurance, limited English proficiency, poverty, and living in overcrowded housing.  Healthcare access is more critical now than ever before.

The Biden administration has taken actions to increase healthcare coverage by creating fiscal incentives for states to expand Medicaid, increasing subsidies for insurance premiums, and opening a special enrollment period for Healthcare.gov and corresponding state exchanges. None of these programs extend to undocumented immigrants.

A path to citizenship would close this gap. The US Citizenship Act of 2021 would make approximately 10.35 million undocumented immigrants eligible for Lawful Prospective Immigrant (LPI) status, which would allow them to purchase healthcare coverage on Healthcare.gov. As CMS research has shown, on most measures of immigrant integration, such as employment, income, and education, legal noncitizens fare better than the undocumented, and the naturalized population matches or exceeds the native-born population by many metrics. The same is true for health insurance.

As we recover from a pandemic that brutalized immigrants in New York City and countless other US communities, we ought to be thinking about how we can improve the health of all US residents. Expanding pathways to permanent residence and citizenship would make our communities healthier.

This paper examines the ability of immigrants to integrate and to become full Americans. Naturalization has long been recognized as a fundamental step in that process and one that contributes to the nation’s strength, cohesion, and well-being. To illustrate the continued salience of citizenship, the paper compares selected characteristics of native-born citizens, naturalized citizens, legal noncitizens (most of them lawful permanent residents [LPRs]), and undocumented residents. It finds that the integration, success, and contributions of immigrants increase as they advance toward naturalization, and that naturalized citizens match or exceed the native-born by metrics such as a college education, self-employment, average personal income, and homeownership. The paper also explores a contradiction: that the administration’s “America first” ideology obscures a set of policies that impede the naturalization process, devalue US citizenship, and prioritize denaturalization. The paper documents many of the ways that the Trump administration has sought to revoke legal status, block access to permanent residence and naturalization, and deny the rights, entitlements, and benefits of citizenship to certain groups, particularly US citizen children with undocumented parents. It also offers estimates and profiles of the persons affected by these measures, and it rebuts myths that have buttressed the administration’s policies.