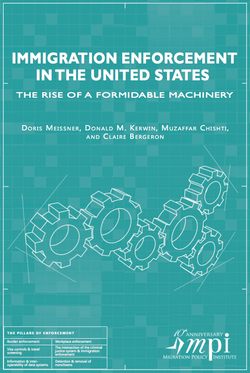 On Monday, January 7, 2013, the Migration Policy Institute (MPI) released a report titled, “Immigration Enforcement in the United States: The Rise of a Formidable Machinery.” The 182-page report was co-authored by Donald Kerwin, Executive Director for the Center for Migration Studies, along with Doris Meissner, MPI Senior Fellow and Director of its US Immigration Policy Program; Muzaffar Chishti, Director of the MPI Office at the New York University School of Law and Claire Bergeron, MPI Research Assistant.

The report offers a detailed analysis of the US immigration enforcement system as it has evolved since the Immigration Reform and Control Act of 1986 (IRCA). It describes six pillars on which this system is built: border enforcement, visa controls and travel screening, information and interoperability of data systems, workplace enforcement, the intersection of the criminal justice system and immigration enforcement and detention and removal of non-citizens.

Among the report’s other key findings:

An MPI-hosted discussion on the report was aired on C-SPAN.

The full report can be downloaded at www.migrationpolicy.org/pubs/enforcementpillars.pdf.

A summary version is available at www.migrationpolicy.org/pubs/pillars-reportinbrief.pdf.