The Clergy: Essential Workers for Immigrants during Pandemics

The coronavirus pandemic’s heroes are the “essential worker,” the medical professionals tending the sick, the bus drivers and train conductors taking those professionals to work and home again, the ambulance crews bringing the desperately ill to the hospital, and the letter carriers, truck drivers, and bicyclists delivering mail, medicine, and food.

For nineteenth and early twentieth-century immigrants, clergy were also essential workers. They alone could hear confessions, bring communion to the sick, and administer the last rites that were the tangible sign of God’s love and care. Educated, economically comfortable, English-speaking Americans could find late nineteenth-century medicine bewildering, as healthcare professionals adopted new techniques in accordance with the evolving germ theory of disease. Recently arrived immigrants without means to learn the new science, unfamiliar with American healthcare institutions or the English language, found clergy to be of practical help in a medical emergency.

Immigrants’ first contact with American healthcare was when their ship arrived and physicians from the United States Public Health Service (USPHS) boarded to quarantine passengers and crew diagnosed with communicable diseases. Crew members were quarantined at the Public Health Service’s hospital on Staten Island; the photograph shows the cemetery set aside for members of the U.S. Merchant Marine who died in quarantine. 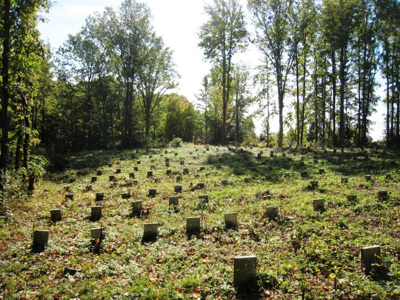 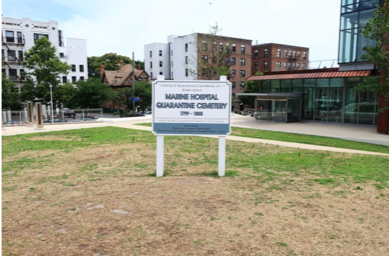 At first, passengers were quarantined with the sailors. The need for passenger quarantine and for burial space increased with the Irish potato famine. USPHS secured a plot near where the Staten Island ferry docks are today, and buried impoverished and sometimes unidentified immigrants in unmarked graves; the site is now a courthouse front lawn. After Staten Islanders, fearful of the spread of disease, burned down the immigrant hospital facilities, immigrants were quarantined on Hart Island.

Immigrants allowed to disembark proceeded to Castle Garden. Any immigrants needing healthcare at this point were sent to Bellevue or public hospitals on Blackwell’s Island. Also at Castle Garden were representatives of privately funded immigrant aid societies. Among them were several Catholic agencies, which employed priests to meet immigrants, speak to them in their own languages, provide aid in the form of inexpensive hostels and meals, and assist them with travel plans or employment searches.

The clergy involved in immigrant aid moved to Ellis Island when it opened in 1891. That same year, Congress passed legislation identifying health conditions that could get a potential immigrant excluded from the United States. But USPHS physicians who conducted the inspections knew that some of the sick could be treated and then accepted as immigrants, and so Ellis Island had a hospital. The girls in the accompanying photograph spent time there. 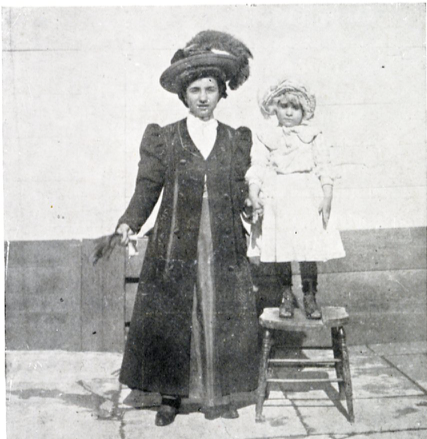 The older is Maria Giuffrida, the younger Angiolino (perhaps Angiolina, the more common spelling for girls) Palizzolo. Physicians, who arrived in 1909, diagnosed both with trachoma. Clergy from the Saint Raphael Society for the Protection of Italian Immigrants helped arrange for the girls’ families to pay for treatment in Ellis Island’s hospital, which is where they met and formed a supportive bond during their long treatment. When the girls were cured and discharged, the St. Raphael Society’s clergy housed them in a hospice run by the Sisters of Charity Pallottine until their families could come get them.

In a day when isolation was a component of most treatments, clergy kept families connected. The girls in the photograph, Maria, Carmela, and Saveria Capabianca were ten, nine, and six years old respectively when their mother underwent surgery. 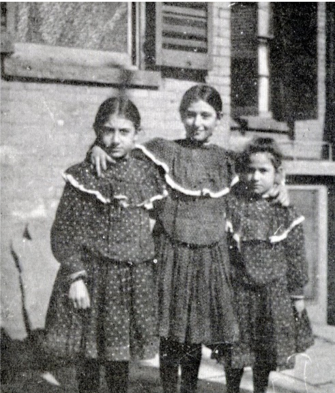 The Saint Raphael Society – which worked with newly arrived immigrants – housed the girls during their mother’s hospitalization so their father could continue working. Clergy and sisters recalled that for a time their evenings were enlivened by the girls’ father’s daily visits, when he brought news about their mother. It took six weeks, but the mother recovered and the family resumed life together.

Clergy played an important role in keeping families connected.  In one case, worried family members brought a problem to Father Antonio Demo, pastor of Our Lady of Pompei in Greenwich Village. On December 5, 1916, Laura Criscuolo, a middle-aged Italian woman arrived at New York City’s Bellevue hospital and then disappeared.  Her family members, working nine hours a day six days a week, unable to speak English or navigate the health care system, arrived on Father Demo’s doorstep around July 9, 1918. Father Demo wrote to Bellevue, only to be informed that they knew no more about  Mrs. Criscuolo than her family did. On January 6, 1917, she had been transferred to a city hospital on Blackwell’s Island, a place for the chronically ill who could not afford to pay for care. Father Demo accordingly wrote to the city hospital. On November 23, 1918, the hospital informed him Mrs. Criscuolo had died August 1, 1917. 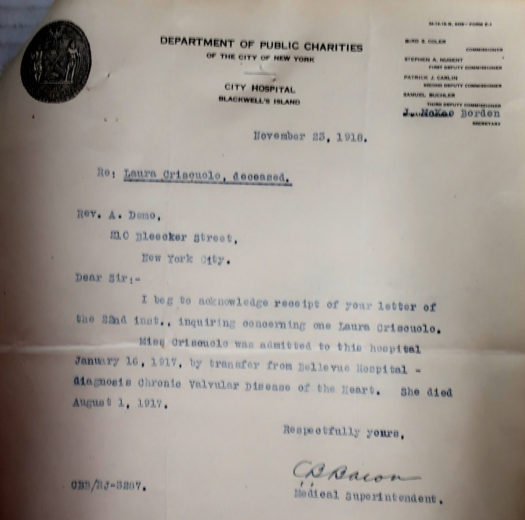 In early 1918, Spanish newspapers, unencumbered by the censorship that hobbled countries engaged in World War I, reported a new, contagious, and deadly form of influenza. That flu appeared in the United States that spring. Without a central authority to impose a prophylactic quarantine, or a clear understanding of transmission, or treatment options, the disease spread quickly. The clergy first noticed it in the course of their pastoral duties. Father Nicholas De Carlo, pastor of Holy Rosary Church in Washington, D.C., noted half a dozen funerals of influenza victims in October 1918 alone. Father Pio Parolin of Saint Peter’s Church in Syracuse speculated that between the influenza and the war (World War I) the world might be depopulated. 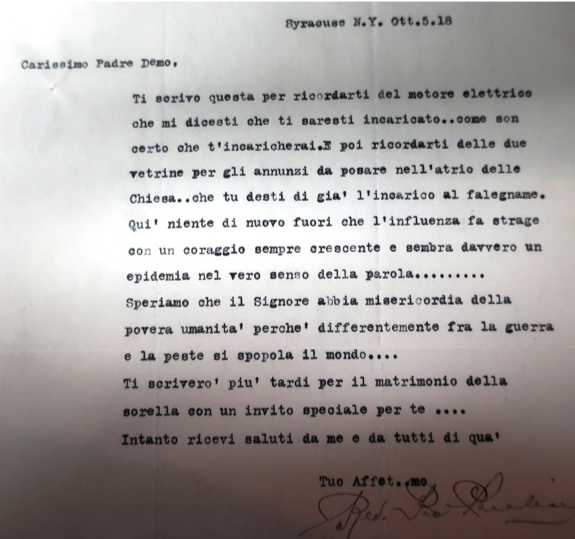 Father Demo, seeking to help a parish family by finding a temporary home for one of its sons, found that child care institutions would not accept new youngsters, for fear of bringing influenza into their midst. 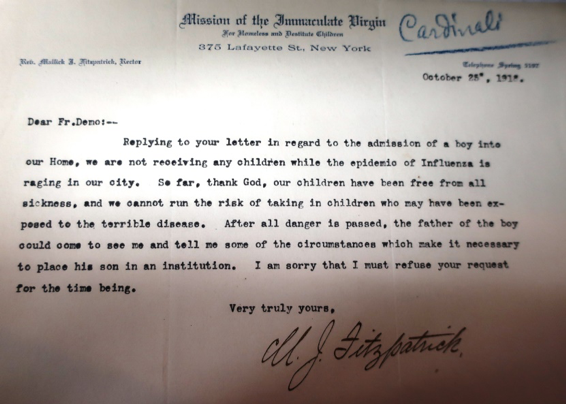 Given that their job included visiting the sick, the clergy also fell ill. At one point, Father Beniamino Franch, an Italian immigrant and pastor of Our Lady of Mount Carmel in Melrose Park, Illinois, was the only healthy priest in his town.

In Catholicism, Sunday Mass is an obligation. At the time of the influenza pandemic, priests distributed communion by placing the host on the communicant’s tongue. Catholics routinely lined up for confession or attended devotional activities. When the Board of Heath of Framingham, Massachusetts, prohibited public gatherings Father Pietro Maschi of Saint Tarcisius asked the Archdiocese of Boston’s chancery if the government could indeed issue commands to the church. The chancery advised him to obey the order, and dispensed Catholic from their Sunday obligation. The Church could provide pastoral services without compromising people’s health. 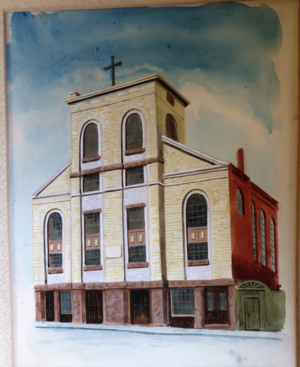 The clergy at Boston’s Sacred Heart parish, pictured above in a 1901 watercolor, provided comprehensive pastoral care. The parochial school’s Sisters of Saint Joseph joined the clergy on rounds through local tenements, where immigrants lived packed so closely together they could not observe the quarantine practices described in the order city authorities posted on tenements where influenza had been diagnosed. William Cardinal O’Connell donated five hundred dollars to this parish, located near Paul Revere’s historic home in a former chapel for sailors in a working-class Italian-American neighborhood. The clergy disbursed sums of five and ten dollars to forty-one families, whom they described for the cardinal: “widower with 8 children, all stricken with grippe . . . wife is at the hospital and 2 of 13 small children stricken . . . widower with 4 sons under 14 years of age, and all sick with influenza at the same time . . . widow with 6 children under 12 years of age . . . .”  The clergy supported their parishioners financially in other ways. Performing funerals positioned the priests to observe undertakers gouging the poor on the prices of coffins and hearses. They protested this exploitation to the cardinal, hoping he would use his influence to remedy the situation.

By late 1919 the flu was waning. On September 7, Father De Carlo scheduled the event seen in this photograph, laying the cornerstone for the church his parish was trying to build amidst wartime supply shortages and influenza. The person in the white vestments on the platform’s left with his face obscured was James Cardinal Gibbons, then 85. Father De Carlo worried about the cardinal’s health not because of influenza, but because it was 98 degrees that day. 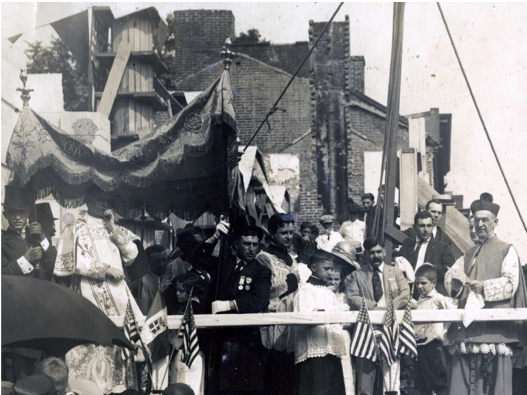 Many practices from the 1918 influenza pandemic have returned during the 2020 coronavirus pandemic. Bishops and archbishops dispense the laity from their obligation to hear Mass and they accept government decisions to suspend public gatherings and to close buildings. The Church takes advantage of modern technology. Clergy visit the sick by phone or videoconference, reserving in-person visits for the administration of the sacraments. They stream Mass and other services, and offer spiritual guidance via social media. Spiritual care remains a significant aspect of comprehensive medical care. When the patient is in the hands of highly trained specialists and perhaps staying in a highly restrictive environment, the clergy help maintain contact with the family and community of which the patient remains a member. They also remain significant in reaching out to those marginalized by language, economic hardship, or lack of access to information. Isolation may be a preferred form of treatment, but, in reality, even in illness, no one is an island.