Credit: Center for Migration Studies
View More in 'From the Archives'

The Center for Migration Studies of New York (CMS) maintains unique archive collections that document US immigration history and policy from the mid-19th century to the present. CMS’s From the CMS Archive series attempts to apply archive records, documents, photographs, and other materials to current US and global immigration policy issues. For more information on this post or to request access to the CMS Archives, please contact [email protected].

During his November 20th announcement to take unilateral measures to improve the US immigration system, President Barack Obama remarked that despite working with Congress to pass a bipartisan bill, legislation continued to be stalled by the House of Representatives a year and a half after the Senate passed S. 744. This is not the first time the path to legislative immigration reform has been protracted.

In an effort to codify immigration policy into single comprehensive legislation, Congress passed the Immigration and Nationality Act of 1952 (also known as the McCarran-Walter Act). Among its provisions, the Act upheld a quota system based on national origins. Despite the fact that individuals born in Italy formed the largest foreign-born population in the United States at the time of the enactment of the McCarran-Walter Act, the Act was heavily biased in favor of Northern European migrants, allotting 70 percent of all immigrant slots to natives from the United Kingdom, Ireland and Germany.

The passage of the McCarran-Walter Act generated opposition among the groups targeted for limits on their migration. One such group, the American Committee for Italian Migration (ACIM), organized to reform the law, hosting symposiums and biennial gatherings of members in Washington, DC to urge change by Congressional representatives.

John F. Kennedy came to the presidency in 1961 with an interest in immigration reform. At ACIM’s 1963 symposium, ACIM Executive Director Caesar Donanzan, C.S., and Senator Edward M. Kennedy organized a meeting with President Kennedy and ACIM members. Photographs from the CMS Archives document the meeting held on Tuesday, June 11, 1963, in the White House Rose Garden – the same day President Kennedy would deliver his major civil rights address on television. At the meeting, President Kennedy announced that he would soon send proposals for immigration reform to Congress. 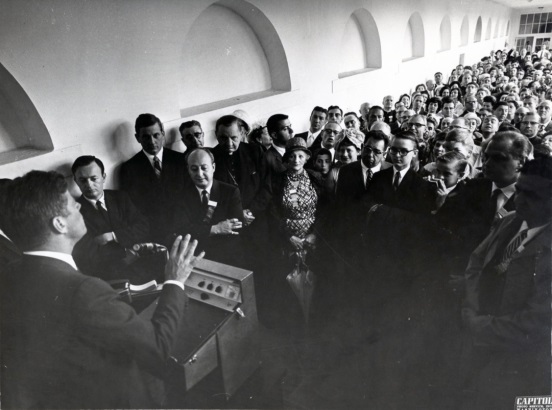 After the 1963 ACIM symposium concluded, Senator Edward Kennedy sent a letter (also maintained in the CMS Archives) to ACIM’s National Chairman, Hon. Juvenal Marchisio, in which he described the next steps in passing immigration reform. Although President Kennedy was assassinated before he could take further steps in improving the US immigration system, Senator Kennedy maintained a relationship with ACIM members through to the successful passage of immigration reform via the Immigration Act of 1965. The Act, also known as the Hart-Cellar Act, abolished the national origins quota system and replaced it with a preference system that focused on immigrants’ skills deemed useful to the United States and on family relationships with US citizens and lawful permanent residents. 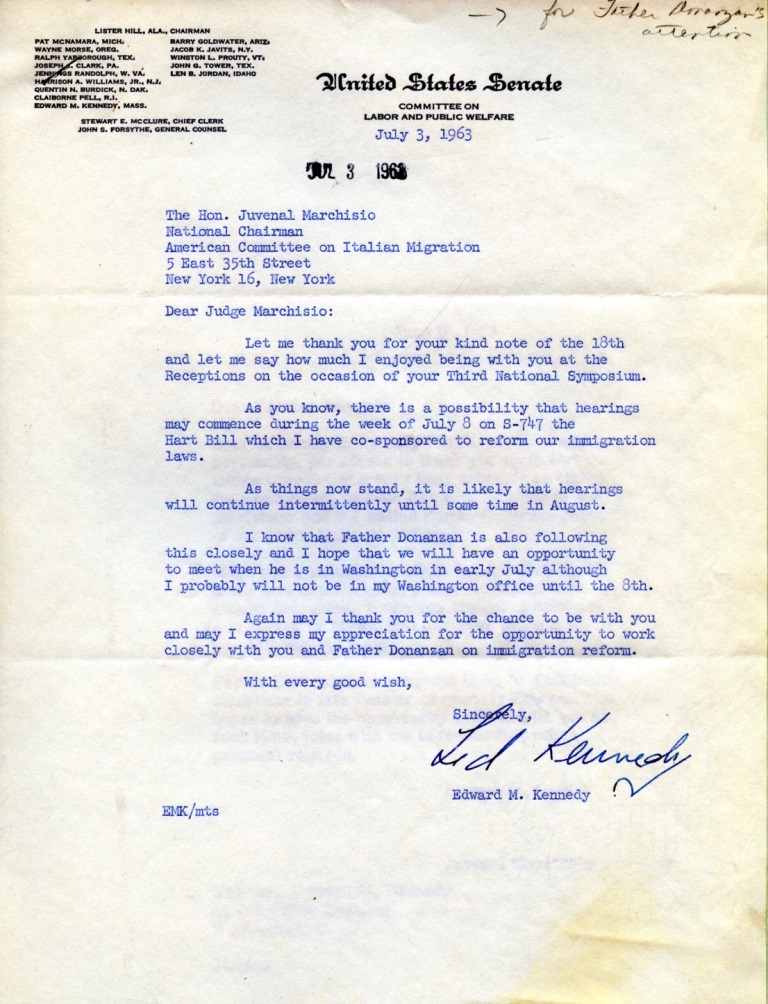