Temporary Protected Status: People “Belong” Where They Are Safe

Although Temporary Protected Status (TPS) is a program designed to aid victims of civil unrest and natural disaster, the Trump administration is using it to make a clear and disturbing statement about larger immigration issues. Since his inauguration, the president has terminated TPS for six countries: Sudan, Nicaragua, Nepal, Haiti, El Salvador, and Honduras, despite the fact that all of these countries are still experiencing civil unrest or aftereffects from natural disasters that led to the granting of TPS in the first place, and none are ready to receive returnees (USCIS 2018). The termination of TPS for these national groups has met with approval in some quarters, expressed in headlines like: “What part of ‘temporary’ do you not understand?” (Holpuch 2018). Behind these headlines is the sentiment that TPS recipients do not belong in the United States, that they have a “home” elsewhere, and that it is time for them to go to it. While nativism is a highly visible part of American history, the Center for Migration Studies’ Archives reveal that nativism has not been the only factor at work in US immigration policymaking.

The 1930s caught the United States unprepared to assist refugees from Nazism. The United States had no refugee visas, and each European nation received a fixed number of visas which was inadequate to the demand. Still, there was something the United States could do. When a Czech immigration worker wrote to Bruce Mohler, Director of the Bureau of Immigration for the National Catholic Welfare Conference (NCWC), about the need for more visas, Mohler pointed out that Congress refused to consider immigration reform, but there were, in fact, “15,000 to 20,000 refugee visitors” in the United States, “many of whom cannot be sent back to Germany because of expired passports, danger of imprisonment and death, etc.”[1]

The start of World War II shut down the Polish pavilion at New York’s World’s Fair. The pavilion’s 12 male restaurant workers, unable to gain passage to war-torn Poland even if they had wanted to go there, immediately found other work, but were in violation of their visas which allowed them to work only at the World’s Fair. US immigration authorities interned the restaurant workers on Ellis Island, where they came to the attention of Rafal Lepkowski, a Polish diplomat who had been dismissed from his embassy job and had secured asylum in Washington, DC.[2] Lepkowski called the NCWC Bureau of Immigration and asked to be put in touch with its New York Port Office, near Ellis Island.[3] 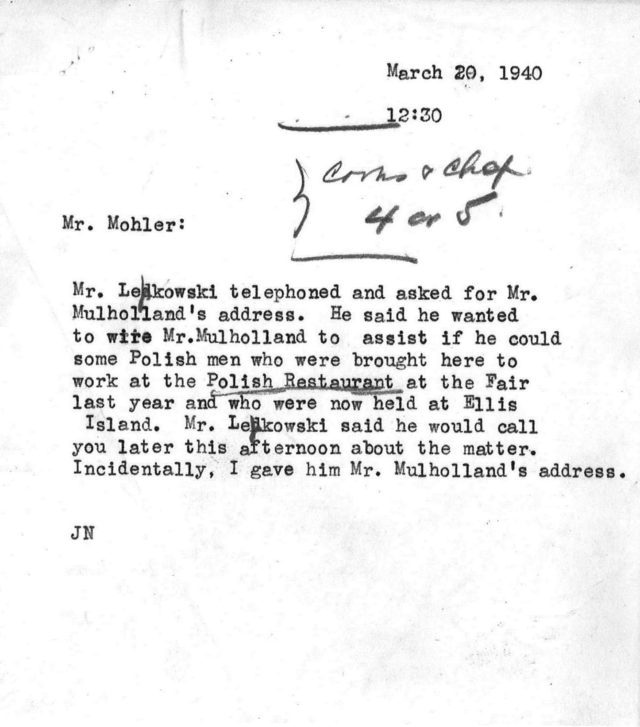 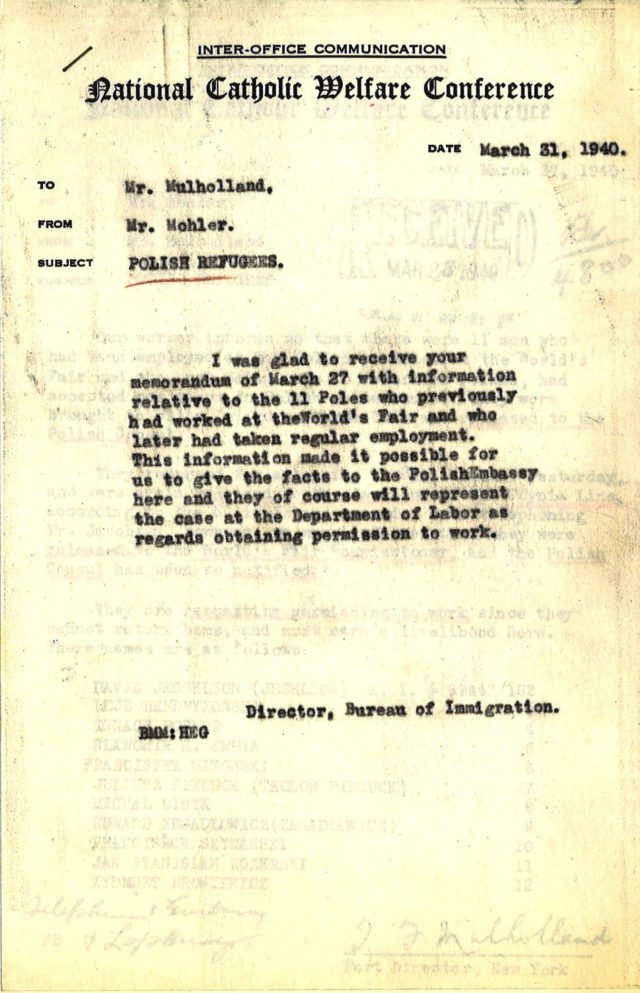 Thomas F. Mulholland, Director of the New York Port Office, investigated. US immigration authorities seemed to have no interest in returning refugees to a war zone. Even before their Ellis Island hearing, the men were released to the Polish Consul. The Ellis Island hearing was inconclusive, but the men had been released again, this time to the World’s Fair Commissioner. Mulholland supplied information from the New York hearings so that further hearings could be held in Washington regarding extending the men’s passports.

After World War II, the United States was more willing to assist those who could not go “home.” The day after the war ended in Europe, the Soviet Union expelled all Germans living in its territories, even though many of these “Germans” descended from merchants and professionals invited by Peter the Great in the eighteenth century as part of his “modernization” plan. The German expellees arrived in Germany only to find there was no housing or jobs for them. Even though they spoke German and considered themselves German, Germans considered them refugees from somewhere else. Instead of coming “home,” they entered displaced persons camps. On June 16, 1950, the US Congress amended its Displaced Persons Act to include German expellees, and extended until July 1, 1952, the period in which they would be aided in displacement camps, thus giving resettlement workers time to find at least some of them new homes in the United States (INS 1999, A1-10).

In August 1972, President Idi Amin of Uganda gave Asian-ancestry Ugandans until November 8, 1972 to leave the country, claiming their success came at the cost of African poverty, and that it was time for them to go “home.” Most Asian Ugandans descended from laborers the British had transported in the 1890s from their colony of India to their colony of British East Africa to provide labor for railroad construction. When the railroad was finished, they remained in British East Africa and formed a small business and professional class. But Uganda was their home, and they had no citizenship elsewhere. By the 1970s, the world had a generation of experience with such crises. The International Committee on European Migration (ICEM), sent a team to count the number who needed help, gather demographic data that would assist with their resettlement, and consult with receiving countries as to how many refugees each could take, what occupations might make the best fit, and the documents the refugees would need. 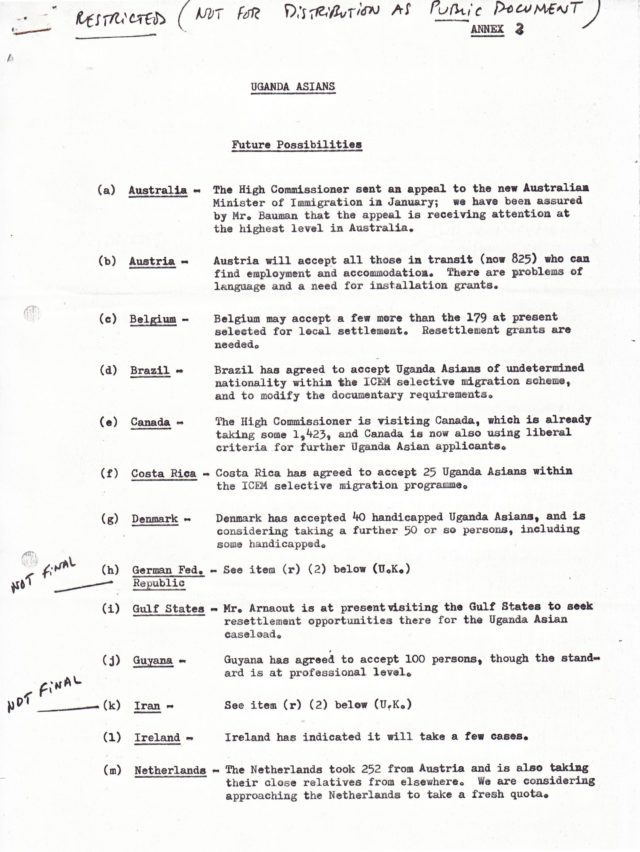 It was decided to transport the people who needed assistance to a refugee camp in Italy ahead of the November 8th deadline. Resettlement workers there would match each family with a new home, taking into account agreements with receiving countries, family connections, and a match between the refugees’ skills and the job opportunities in the place of resettlement. The United States agreed to accept 1000 refugees. Other governments also announced the numbers they could accommodate. Those that received US visas were then matched with a voluntary agency, including the US Catholic Conference’s Migration and Refugee Service, to help with their resettlement. Each participating agency received about 135 families.[4] 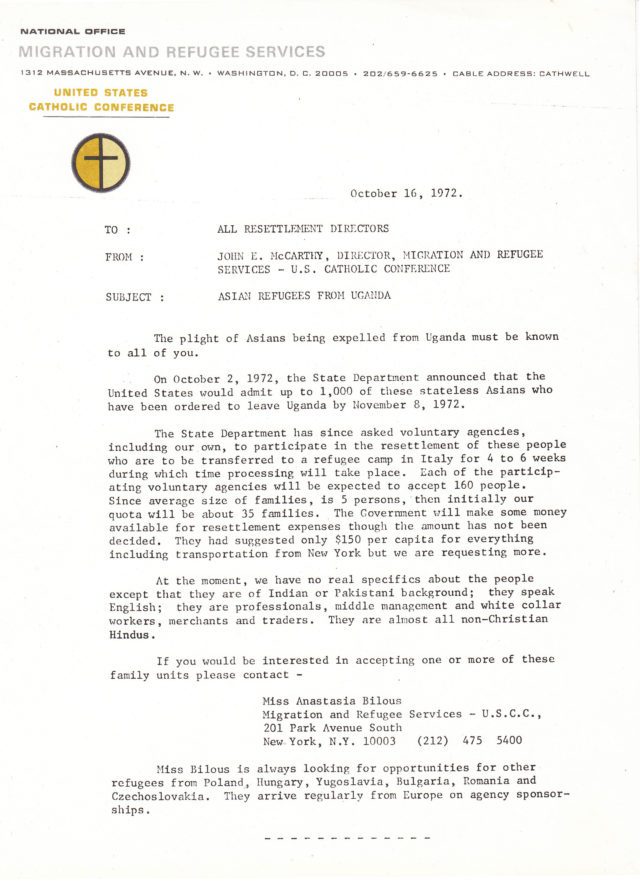 Seven years after his expulsion of Asian Ugandans, Amin himself had to flee Uganda, ending the crisis he had precipitated. However, Amin’s ouster did not mean that they could return to their old lives in Uganda. In those seven years, the refugees had integrated into their communities. Entrepreneurs started businesses, professionals developed a circle of clientele, and almost everyone raised children. President Trump has put his finger on one important point. What seems to be a “temporary” situation or status to policymakers and legislators does not always look that way to a person living with the decision.

Opponents of immigration often note that the United States cannot solve all the world’s problems. They are right. The United States cannot stop gang violence in El Salvador or prevent earthquakes in Haiti. Extending TPS to those who need it, for as long as they need it, will not solve problems in their home countries, but it will help the people who are victims of the problems.