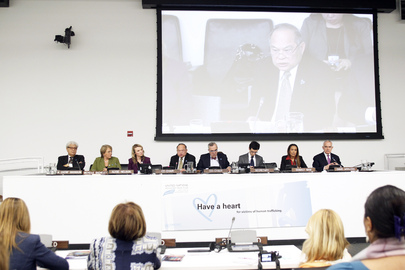 On April 3, 2012, the UN General Assembly hosted an interactive dialogue entitled “Fighting Human Trafficking: Partnership and Innovation to End Violence against Women and Girls.”  The dialogue was organized by the President of the General Assembly, Group of Friends United against Human Trafficking and the UN Office on Drugs and Crimes (UNODC). Its objective was to unite Member States, the UN system, international organizations, civil society, the private sector and the media in a comprehensive strategy to fight trafficking, with special emphasis on victim protection.

At any given time, an estimated 2.5 million people endure various forms of forced labor, from domestic servitude to sexual exploitation, as the result of human trafficking. Global profits from trafficking are estimated at $31.6 billion annually. However, the US Department of State reports that in 2010 there were only 6,017 prosecutions and 3,629 convictions for trafficking worldwide.

Women and girls are at particular risk. According to the International Labour Organization (ILO), 56 percent of those subject to “forced economic exploitation” and 98 percent of victims of “forced commercial sexual exploitation” are female. Although people can be trafficked within their home countries, forced or coerced movement for the purposes of exploitation frequently crosses international borders. The UN Global Initiative to Fight Human Trafficking (UN.GIFT) reports that trafficked persons originate in 127 countries and exploitation occurs in 137 countries. Human trafficking often intersects with migrant smuggling, a crime that involves the illegal entry of a person into a state. However, migrant smuggling ends once a person arrives at his or her destination.

In 2003, the UN General Assembly adopted The Protocol to Prevent, Suppress and Punish Trafficking in Persons, especially Women and Children, (“Trafficking Protocol”) supplementing the UN Convention against Transnational Organized Crime. The Trafficking Protocol is intended to facilitate convergence of national legal approaches and to enhance international cooperation in investigating and prosecuting trafficking in persons cases.  It also seeks to improve protection and assistance for victims. The Protocol reflects the “3P” paradigm – Punishment, Protection, Prevention – which is customarily adopted as the strategic approach to human trafficking by states and international actors.

During the event’s opening remarks, Secretary-General Ban Ki-moon emphasized the need for nations “to coordinate their labour and migration policies” as a way to minimize trafficking.

Throughout the dialogue, speakers stressed the necessity of addressing the root causes of trafficking, as well as engaging with victims and survivors.

According to William Lacy Swing, Director General of the International Organization for Migration (IOM), the financial crisis has played a major role in facilitating trafficking. The serious slowdown in world economic growth has caused demand for cheap goods and services to grow. UNODC expects the impact of the crisis to push more businesses underground to avoid taxes and unionized labor, and to use forced, cheap, and child labor. Economic pressures are particularly acute in the case of agricultural and other immigrant workers who are over-represented in low-wage, non-unionized, dangerous jobs, and subject to abuses like non-payment of wages. In addition, foreign-born workers are among the first to lose their jobs during economic downturns. In addition, the public perception that migrants displace native workers exacerbates xenophobic and racist attitudes, and tightened immigration policies can make migrants more vulnerable to trafficking networks.

Several speakers criticized governments for “criminalizing” victims rather than properly pursuing the perpetrators who drive and exploit demand. According to M. Cherif Bassiouni, Professor of Law at DePaul University, this strategy allows “those driving demand [to] do so with impunity,” while those driving supply to “act with minimal risk.” The US State Department reports that in many countries, victims are blamed for being trafficked and prosecutions fall apart as a result.[1]

Yuri Fedotov, Executive Director of UNODC, argued that government and civil society must craft more compassionate and appropriate law enforcement responses to victims, while combating the market forces that lead to trafficking. Lacy called for an increase in shelters and migrant centers. Two trafficked women spoke based on their own experiences. Somaly Mam, President of the Somaly Mam Foundation, reported that trafficking networks are highly organized. She urged the assembly to empower victims to become survivors. Rani Hong, founder of the Tronie Foundation, agreed that the best method of ending trafficking involved engaging and respecting the agency of survivors.

Michelle Bachelet, Executive Director of UN Women, stated that the failure of governments to provide and uphold equal political, economic, and social rights to women and girls perpetuates unequal opportunities. According to Bachelet, many women seeking better work options abroad end up at the lower end of the job market, where they routinely lack access to social services and legal protection and are subject to harsh working and living conditions, low wages, illegal withholding of wages and premature termination of employment. To mitigate these risks, Bachelet argued for human rights education, better job opportunities, and inclusion of trafficking victims in policy discussions and advocacy.

Lacy additionally argued for engagement with the private sector and employers, particularly in the realms of “agriculture, construction, fisheries, textiles and domestic service.”  He urged  corporations to disseminate information and create awareness among their workforce; to adopt codes of conduct to keep their supply chains and human resource practices free of exploitation and trafficking; and to collaborate and support other global actors and initiatives (http://www.ungift.org/knowledgehub/business/intro.html). David Arkless, President of Corporate and Governmental Affairs of ManpowerGroup, highlighted the work of the Business Coalition Against Human Trafficking (BCAT) which encourages US businesses to examine their supply chains for signs of complicity in trafficking.

Overall, the UN dialogue highlighted the need for collaboration among stakeholders – governments, business, academia, civil society and the media – in order to address gaps in protection, to increase knowledge, and to improve responses.

[1] In an Open Society Institute (OSI) conference titled, “Ending Demand to End Sex Trafficking: Does it Work?” on April 12, 2012 following the dialogue, journalist and OSI fellow Noy Thrupkaew contended that policies related to ending demand are advanced based on narratives that fail to reflect the types of violence victims actually report.