The House Version of the Build Back Better Act

View More in 'CMS News'
On November 19, the House passed the Build Back Better Act, which includes significant immigration provisions. First, it would provide parole, work authorization, and protection from deportation for certain noncitizens who entered the United States before January 1, 2011, continuously resided in the country since then, and are not inadmissible due to certain criminal or security offenses. CMS estimates that 61 percent or nearly 6.3 million of the 10.35 million US undocumented residents entered the United States prior to 2011 (Table 1). A large percentage of this group would qualify for parole – essentially a reprieve from removal – for five-year, renewable periods. (Parole cannot be granted under the Act beyond September 30, 2031.) Eligible noncitizens would also be eligible for a REAL ID-compliant driver’s license or state identification card, and could travel outside of the United States and return. 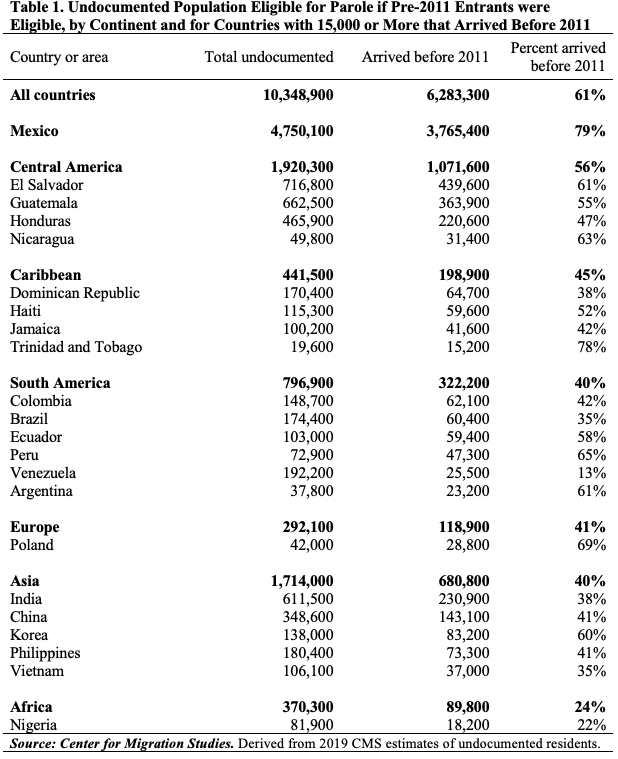 Second, the Act addresses one of the most troubling features of the US legal immigration system; that is, the multi-year visa backlogs for persons who have been determined by US Citizenship and Immigration Service (USCIS) to be eligible for a family- or employment-based visa. For an explanation of this system and a profile of the 3.5 million family members of US citizens and lawful permanent residents (LPRs) mired in backlogs, see”Fixing What’s Most Broken in the US Immigration System.” The Act would reduce backlogs by recapturing and reissuing family- and employment-based immigrant visas that went unused from FY 1992-2021. Individuals who were selected to apply for diversity visas in FY 2017 through 2021, but were refused a visa or denied admission to the United States because of certain executive orders or were unable to complete the process because of COVID-19 related restrictions, would be able to reapply for their visas.

The Act would also exempt from per-country and worldwide limitations on immigrant visas the beneficiaries of certain visa petitions who are waiting for visas to become available so they can submit their applications for adjustment to LPR status in the United States. [These exemptions would be granted until September 30, 2031.] Beneficiaries with a priority date that is more than two years before the date they request the exemption would need to pay the following fees in order to receive it:

This paper offers estimates and a profile of the 1.55 million US residents potentially eligible for a family-based immigration visa based on a qualifying relationship to a US citizen or lawful permanent resident (LPR) living in their household.  It finds that this population – which is strongly correlated to the 3.7 million persons in family-based visa backlogs – has established long and strong roots in the United States, with US-born citizen children, mortgages, health insurance, and median income and labor force participation rates that exceed those of the overall US population. The paper offers several recommendations to reduce family-based backlogs.  First, it calls for Congress to pass and the administration to implement legislation that provides a path to LPR status for persons in long-term backlogs. This legislation should: 1) define the spouses and minor unmarried children of LPRs as “immediate relatives” not subject to numerical limits, 2) not count the derivative family members of principal visa beneficiaries against per country and annual quotas, and 3) raise per country caps. The administration should also re-issue the visas of legal immigrants who emigrate each year, particularly those who formally abandon LPR status. Finally, Congress should also advance the cutoff date for the US registry program.