Immigration Detention: Behind the Record Numbers

In FY 2012, the United States Department of Homeland Security (DHS) detained a record 477,523 adult noncitizens.[1] Since the Obama Administration announced its detention reform initiative in 2009, the number of noncitizens DHS detains yearly has increased by nearly 25 percent. Since passage of the Illegal Immigration Reform and Immigrant Responsibility Act (IIIRIRA) in 1996, it has expanded over fivefold.[2] The increase in detention seems to stem, in part, from an even greater rise in use of summary removal processes applied to non-citizens, including asylum-seekers. In addition, looking behind the numbers suggests that persons in normal removal proceedings (before an Immigration Judge) face ever longer periods in detention.

Since passage of IIRIRA, DHS has widely implemented three types of summary removals: “expedited removal” for noncitizens who encounter immigration authorities at or near a US border with insufficient or fraudulent documents; [3] “reinstatement of removal” for noncitizens who unlawfully reenter after a prior removal order; [4] and “administrative removal,” for  noncitizens without lawful permanent resident (LPR) status, but with a prior criminal conviction which is considered an “aggravated felony” under US immigration laws.[5] All impose mandatory detention during the summary removal processes (with some limited exceptions, described below).

Removals under these summary processes now constitute the vast majority of US removals in FY 2012. Nearly three-quarters of removals are via “expedited removal” (39 percent) or “reinstatement of removal” (35.6 percent), not including “administrative removals” which DHS does not report.[6] These two forms of summary removal increased from 56.2 percent of all removals in FY 2009 to nearly 75 percent in FY 2012. 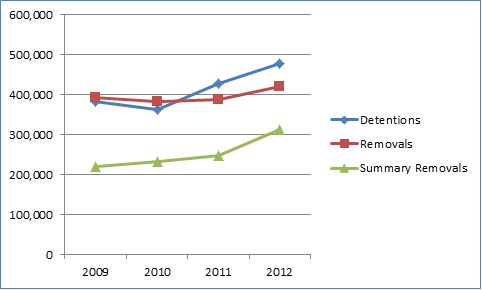 For one, as more asylum seekers approach the border, and DHS processes more through summary procedures, more are likely being detained in violation of international human rights law. The Congressional Research Service reported a surge in “credible fear” claims of persecution by those in expedited removal (36,000 in FY 2013, compared to 13,391 in FY 2012 and about 5,000 in FY 2009).[8] The increase is largely from El Salvador, Guatemala, Honduras, and “to a lesser extent” Mexico, all experiencing high levels of gang and drug-related violence and civil unrest.[9] These four countries accounted for 90 percent of detainees in FY 2012 (64.4 percent from Mexico, 10.6 percent from Guatemala, 8.5 percent from Honduras, 6.6 percent from El Salvador), with no other country producing more than 1 percent of US detainees.[10] It is plausible that DHS’ increase in use of summary processes is causing the resultant increase in detention, largely driven by these four countries, and including some substantial percentage of asylum seekers.

Asylum seekers are mandatorily detained pending a DHS determination of their “credible fear” of persecution upon return. This detention lasts an average of 27 days, including the time it takes to ascertain whether they have a “credible fear,” and to decide whether those found to have a credible fear should be “paroled” (released) while they pursue political asylum. Their detention arguably violates international human rights law, which provides that detention should be a “measure of last resort” — the exception, not the rule — and subject to strict time limits, ideally 48 hours.[11]  Moreover, those whom arrive between ports of entry — 70 percent of those claiming credible fear, nine months into FY 2013[12] — are eligible for parole under US statutes, but not in practice under DHS’s current policy. They remain detained unless they affirmatively request and win a formal bond hearing in immigration court (a difficult task without appointed counsel).

For example, DHS reported in 2009 that noncitizens were detained for 30 days on average — but 25 percent are released in one day, 38 percent within one week, and 71 percent within one month.[13] These early “releasees” likely include many in summary processes who are quickly deported or accept voluntary departure or return. For example, an independent review of 2012 data received through FOIA showed that of individuals detained for three days or less, 77 percent were deported or voluntarily departed or returned, compared to 20 percent released.[14]

Meanwhile, Center for Migration Studies Executive Director Donald Kerwin’s separate 2009 report, based on a one-day snapshot of the detention population obtained through FOIA, found the average length of detention was much longer for those in formal removal proceedings — 81 days.[15]  The report also found that 13 percent had been detained for six months or longer.[16]

As the use of short-term detention tied to summary removal increases, it can be expected that average length-of-detention statistics will mask the long-term detention of many of those in formal removal proceedings.  Available statistics since 2009 bear this out.  As of December 12, 2011, the average length of detention had dropped from 30 days to under 28 days.[17]  Meanwhile, as the immigration court backlog continues to grow, case times for detainees in formal removal proceedings grow as well. For example, the average detainee’s case in New York today has been pending for 205 days, nearly seven months.[18] (Non-detained removal cases are even more backlogged. The average removal case in immigration courts nationwide has been pending for 570 days, over a year and a half.)[19]

A detainee’s wait time has particularly severe impact, i.e. deprivation of liberty and separation from work and family. Moreover, legal noncitizen residents, most likely to have work and family ties, are more likely to be detained longer. The 2012 data showed that the longest average detention time (131 days) was for those whom had proceedings terminated because a judge determined they were lawfully present, and never should have been detained.[20]

Prolonged detention in removal proceedings is additionally concerning because DHS so often chooses detention when exercising its discretion at the start of a case. An NYU study found that ICE denied bail to nearly 80 percent of New York arrestees from 2005-2010 — with 71 percent reflecting discretionary choices, and only 9 percent reflecting legal mandates.[21]  Meanwhile, as DHS routinely chooses detention, the odds are increasing that that detention will be prolonged.

These prolonged detention times also potentially have constitutional impact. In Demore v. Kim, 538 U.S. 510 (2003),[22] the Court upheld mandatory detention in removal proceedings, in part because detention lasted for a “very limited” time.  Internal immigration court data then showed that cases involving mandatory detention resolved in 47 days on average. If detention is routinely more prolonged, though, a different constitutional outcome may be warranted.  And today, courts are holding in cases such as Rodriguez v. Robbins that mandatory detainees have a right to a bond hearing,[23] based on emerging data showing that when detention occurs, it is quite prolonged. A 2013 expert report in that litigation found that of mandatory pre-hearing detainees detained six months or longer, the average length of detention was about 14 months.[24] One-third of these detainees (33 percent) won their cases, showing that challenging deportation, even when mandatorily detained by law, was not a lost cause.

[4] 8 U.S.C. § 1231(a)(5); 8 C.F.R. § 1241.8.  Although “reinstatement of removal” existed prior to IIRIRA’s 1996 passage, in INA 242(f), IIRIRA greatly expanded its applicability, streamlined available hearings, and eliminated available relief. First, IIRIRA expanded the reinstatement provision to apply to all who were deported for any reason, rather than those deported for certain enumerated reasons (i.e. an aggravated felony). Second, IIRIRA streamlined the hearing process, eliminating the right to a hearing before an immigration judge and providing for only a written statement before a DHS official. Third, IIRIRA eliminated discretionary relief (aside from asylum), and eliminated any ability to attack the validity of the prior removal order.

[7] Since FY 2009, DHS detention bed space increased by roughly 3,000 beds per night which, if filled each night, translates into an additional 1,095,000 detention nights per year.  Assuming the average stay of 30 days/per detainee in FY 2009, this extra bed space would translate to an extra 36,500 individuals detained per year — only 38 percent of the additional 93,999 individuals detained per year since FY 2009. Moreover, it is unclear whether the increase in capacity is a cause or effect of the increase in noncitizens passing through detention.

[11] United Nations High Commissioner for Refugees (UNHCR), Guidelines on the Applicable Criteria and Standards Relating to the Detention of Asylum-Seekers and Alternatives to Detention 16-19 (2012), available at http://www.unhcr.org/refworld/docid/503489533b8.html.

[14] TRAC, Legal Noncitizens Receive Longest Detention (June 3, 2013), available at http://trac.syr.edu/immigration/reports/321/#f1. The report analyzed a snapshot of detainees either deported or released in November and December 2012 data.  40 percent were detained for three days or less.  Of those, 65 percent were removed, while 12 percent took voluntary return or departure.

[16] Along these lines, the November and December 2012 snapshot found that those detained longer were more likely to be released.  Of those detained over 30 days, 57.5 percent were removed, 3.9 percent accepted voluntary return or departure, and 34.6 percent were released.  The percentage released rises to 41 percent of those detained six months or longer. TRAC, Legal Noncitizens Receive Longest Detention (June 3, 2013), available at http://trac.syr.edu/immigration/reports/321/#f1.

[21] NYU School of Law Immigrant Rights Clinic et al., Insecure Communities, Devastated Families: New Data on Immigrant Detention and Deportation Practices in New York City 10 (2012), available at http://immigrantdefenseproject.org/wp-content/uploads/2012/07/NYC-FOIA-Report-2012-FINAL.pdf.  DHS set bond for another 20 percent, with nearly 75 percent of bonds over $5,000; and released less than 1 percent on recognizance.  This starkly contrasts parallel New York criminal bail decisions, where criminal judges release 68 percent on recognizance; set bond for another 31 percent, with 80 percent of bonds under $1,000; and deny bail to only 1 percent.