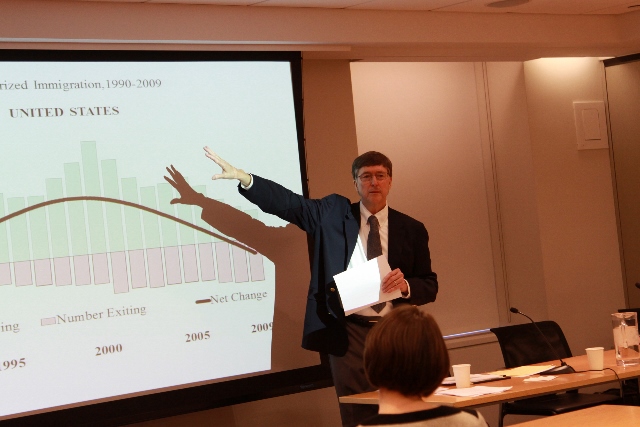 Robert Warren, former demographer for the US Immigration and Naturalization Service (INS), provides new estimates on visa overstays in a short paper entitled, “A Review of the Declining Numbers of Visa Overstays in the United States from 2000 to 2009.” These new numbers are drawn from the recently released study, “Unauthorized Immigration to the United States: Annual Estimates and Components of Change, by State, 1990 to 2010,” that Mr. Warren co-authored and presented with John Robert Warren, professor of sociology at the University of Minnesota. This earlier report finds a decline in “arrivals” or “inflows” into the unauthorized population in every state except Mississippi (and Washington, DC) from 2000 to 2009. While estimates of total arrivals are important for understanding overall trends, information about unauthorized immigrants’ mode of arrival can help to inform US policy discussions on immigration enforcement, legalization of the unauthorized and reform of the legal immigration system. This short paper examines the degree to which the drop in arrivals was due to a reduction in entries without inspection (EWIs) versus reduced numbers that entered legally on temporary visas and “overstayed” their permitted duration of admission. The trends in arrivals of EWIs and overstays set forth in this paper for the largest states provide significant new information about patterns of unauthorized immigration to the United States.

To read the full paper, visit: “A Review of the Declining Numbers of Visa Overstays in the United States from 2000 to 2009.”