One Hundred Years of American Catholic Assistance to Immigrants in Transit

NCWC staff and volunteers at their desk on a Manhattan dock in the 1940s. Credit: Center for Migration Studies
View More in 'From the Archives'

One lesson is the importance of compiling an historical record. Thanks are due to Bruce Mohler, Director of the NCWC Bureau of Immigration and to Thomas F. Mulholland, who reported to Mohler in his capacity as Director of the Port of New York. They were both excellent recordkeepers and they were friends, as well as supervisor and supervisee. The many memoranda between them give a real insight into the problems the agency faced and how it solved them, setting precedents for future immigrant aid. Thanks are also due to Cardinal Silvano Tomasi, c.s., who served as the first director of the US bishops’ Office of Pastoral Care for Migrants and Refugees (PCMR), and Mark Franken, former Executive Directors of MRS, for archiving files of their predecessor agency. Their work allows us to draw the lines from past to present.

A second lesson the NCWC teaches is obvious to Americans today: a country that receives immigrants bears responsibility for them. In the nineteenth century, activists in the countries that were sending immigrants were the first to become concerned about the fate of their compatriots. In the Catholic world, Peter Paul Cahensly, Charlotte Grace O’Brien and Bishop John Baptist Scalabrini founded organizations with offices serving departing immigrants at European ports and arriving immigrants in New York harbor. American interest in the care of immigrants was usually confined to the bishop or archbishop of the city where the port was located. The NCWC Bureau of Immigration was an organizational statement on the part of the American Catholic hierarchy that the Church in the United States realized immigrants might need some assistance during their journeys.  In response, the whole Church would collect funds and apply them to the places where they were needed. 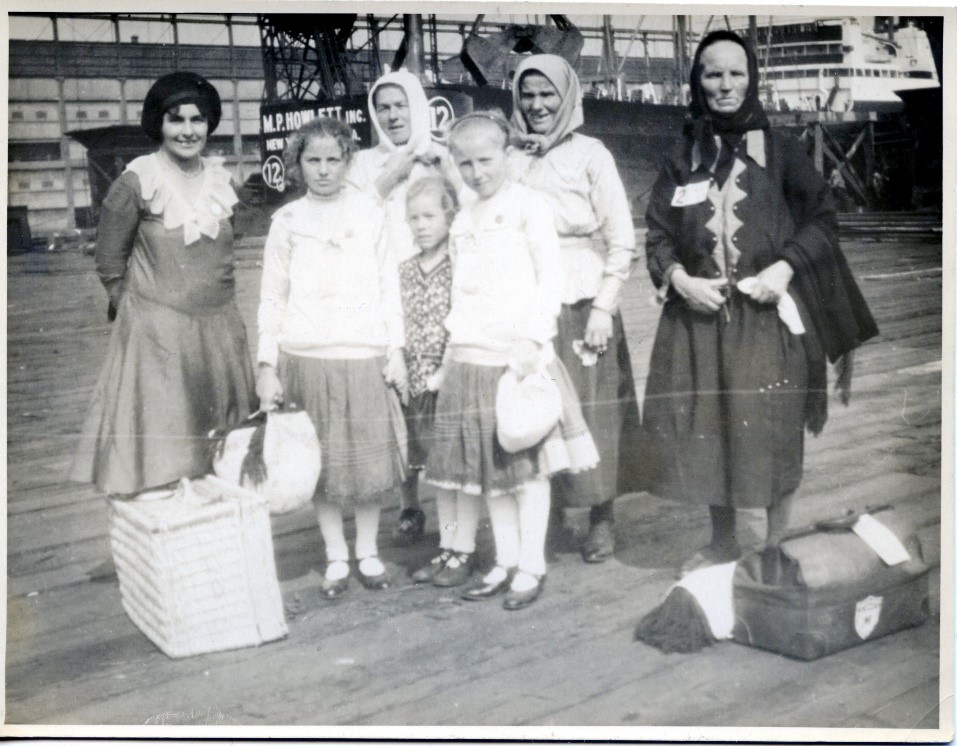 A third lesson is that immigrant aid is a temporary phenomenon. During the 1920s, the NCWC Bureau of Immigration transmitted information about new arrivals to the National Council of Catholic Women, which sent volunteers to help newly settled immigrants to find a parish and to enroll their children in parochial school. Once the immigrants entered their new parish community, they proceeded to integrate at their own pace. Aid became more comprehensive in the years immediately after World War II, when the NCWC Bureau of Immigration New York Port Office participated in federal efforts to resettle displaced persons, most of whom had lost homes and educational or job-training opportunities during the war. While some people’s war experience meant they needed long-term assistance, most people adjusted quickly, and there was no backlash to the large-scale migration that occurred after World War II. The Refugee Act of 1980 included a plan for overseeing refugee care after the refugees had entered the United States. Until 1995, MRS representatives met refugees at airports and entrusted them to the care of diocesan resettlement offices, which helped them to find homes, jobs, and English lessons, and tracked their progress for their first six months in the United States. Although naysayers have always complained about immigration, immigrants have always integrated, and these refugees did as well. 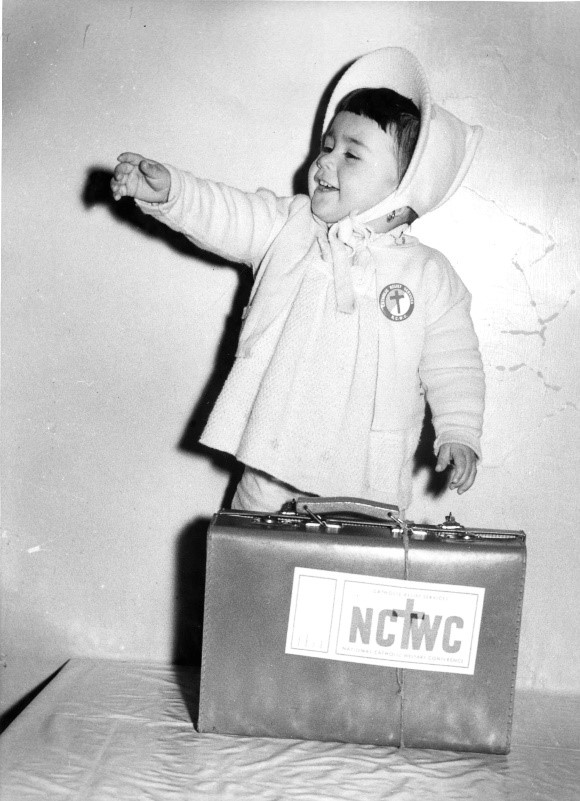 The NCWC helped this Italian girl and her family resettle in Brooklyn under the provisions of the Refugee Relief Act of 1953. Credit: Center for Migration Studies.

A fourth lesson is the importance of collaboration between public and private agencies and among non-profit agencies. After the NCWC Bureau of Immigration assumed responsibility for Catholic immigrants arriving at American ports and borders, the NCWC reached out to Catholic immigrant aid agencies in sending countries to try to work with them to provide continuous assistance. The NCWC cooperated with the government almost to a fault, working within the law rather than criticizing it. The New York Port Office also worked across faith lines. In the 1950s, before the Second Vatican Council’s Declaration on the Relation of the Church to Non-Christian Religions, Nostra Aetate, workers from Catholic and Jewish agencies worked side by side in New York Harbor.

A final lesson is the importance of having laws in place to address emergencies. That was a lesson bitterly learned when the 1935 Nuremberg Law revoked the citizenship of “non-Aryans.” This was an attack upon the Jewish people, but while most people thought of Judaism as a religion, Nazis thought of the Jewish people as a race and included converts and their descendants among non-Aryans. People suddenly found themselves or their spouses and children at risk. The German Catholic hierarchy expected that a part of their flock would have to find refuge elsewhere and called on Catholics in other countries to provide it. However, the American Catholic Church could be of limited help, because immigration law restricted the number of people who could enter the United States. Church leadership at the time decided not to call for less restrictive legislation. Their calculation was that there would be too much opposition to admitting additional immigrants during the Great Depression. The result was the NCWC Bureau of Immigration did what it could by providing advice on immigration issues to a Committee for Catholic Refugees from Germany. Perhaps another lesson from this tragic period is the importance of having a voice and using it. 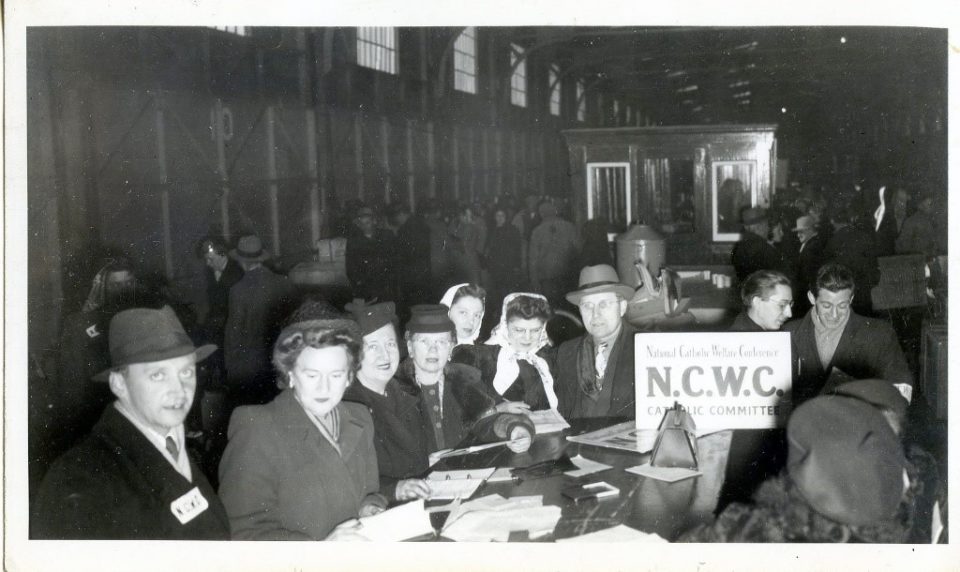 NCWC staff and volunteers at their desk on a Manhattan dock in the 1940s. Credit: Center for Migration Studies

From the New York Port Office Thomas Mulholland sent his supervisor annual reports that detail busy days and busy years. The work varied. Immigrants in transit might need legal advice, or a translator to help them speak to an Ellis Island doctor about a medical condition hindering their reception, or help tracing lost luggage, changing money, contacting relatives, or planning further travel inside the United States. The immigrants assisted by the NCWC varied: they included people fleeing the People’s Republic in mainland China in 1949, the Hungarian Revolution in 1956, civil war in Lebanon in 1958, and the rise of Fidel Castro in 1960.  It wasn’t just the ethnic groups that varied; there are other ways to measure immigrant demography. The NCWC assisted with the resettlement of nuns and clergy expelled from Mexico and from Soviet-bloc countries in the Cold War and facilitated international adoptions of children from countries in Europe and Asia. All of the details of this work formed patterns, and the patterns formed precedents that continue to shape immigrant and refugee assistance. It is hoped that the example of a century of service will continue to inspire Catholic and other institutions as they welcome immigrants and refugees today and into the future.