This paper combines data from two reports[1] by the Center for Migration Studies (CMS) with Department of Homeland Security (DHS) statistics on apprehensions, adjustment of status, and removals, to illustrate major trends in undocumented immigration to the United States since 1990. It shows that the undocumented population and undocumented migration to the United States — which includes both entries without inspection (EWIs) and overstays of temporary visas — have fallen dramatically. In particular, the undocumented population has declined by one million since 2010; illegal entries have plummeted to historic lows; and, in recent years only one third of newly undocumented residents entered this population by crossing the southern border.

The trends illustrated below demonstrate the substantial progress that has been made since 2000 in reducing undocumented migration and reversing undocumented population growth. The most likely reasons for these sharp declines are increases in enforcement at the southern border during the Bush and Obama administrations and improved economic and demographic conditions in Mexico. Overall, despite the rise in applications for asylum at the southern border, undocumented migration to the United States today is lower than it has been in the past 25 years (Table 1).  Applicants for asylum should not be included in statistics on undocumented immigration. However, because of limitations in the data, many of them are erroneously included as undocumented residents. This erroneous classification of asylum seekers — who are exercising a right recognized under international and domestic law — accounts for some of the increase in arrivals after 2012 shown in Table 1, column 3.[2]

Figure 1 shows the steep drop in undocumented population growth, from about one million in 2000 to near or below zero growth after 2008. All the estimates shown in this paper are subject to sampling and non-sampling errors; nevertheless, such errors would likely be spread over the entire period, and thus would not be likely to affect the trends shown here. 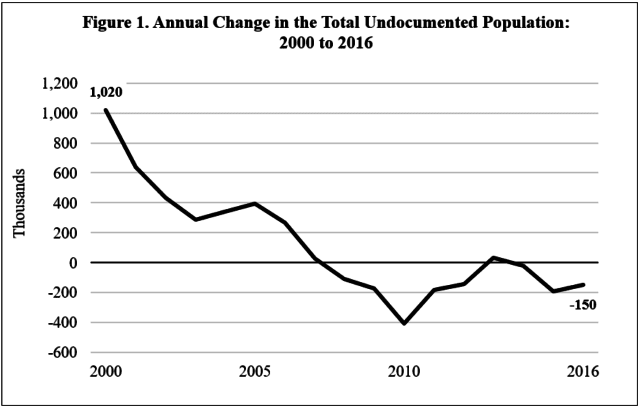 Figure 2 shows DHS data for apprehensions of undocumented residents at the southern border from 2000 to 2017. The remarkable 81 percent decline in apprehensions, from 1.6 million in 2000 to about 300,000, occurred even though the size of the Border Patrol more than doubled, from 9,200 in 2000 to 19,400 in 2017 (CBP 2017b). These statistics strongly support the estimates of declining population growth shown in Figure 1 and the sharp drop in arrivals of undocumented residents from 2000 to 2010 shown in Figure 3. That is, if arrivals across the border had not been falling rapidly, the number of apprehensions would have increased as the size of the Border Patrol increased. 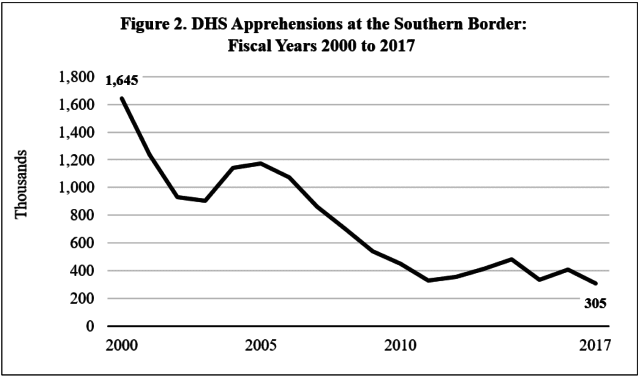 Figure 3 shows why population growth fell so rapidly after 2000 — arrivals dropped from 1.4 million in 2000 to fewer than 400,000 in 2009, a decline of more than 70 percent (Table 1). Meanwhile, the number of departures from the population steadily increased, from 370,000 in 2000 to about 770,000 in 2016. Annual statistics on departures from the undocumented population, including through emigration (voluntary departures), adjustment of status, removal by DHS, and death, are shown in Table 1. 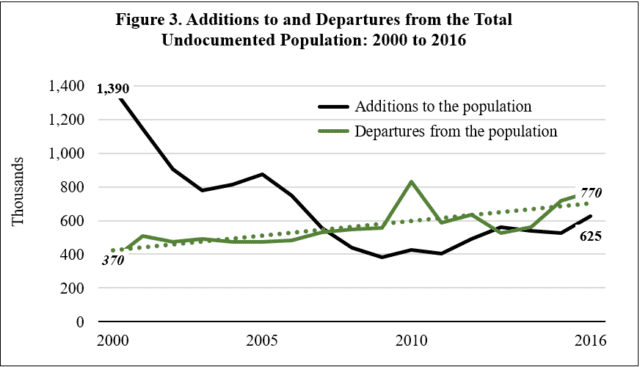 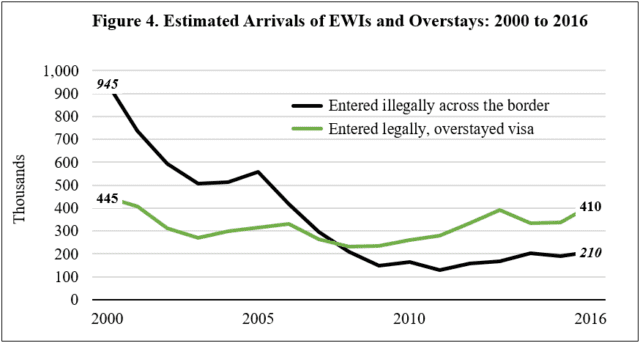 Certainly, there is a strong need to address the conditions driving the high numbers of asylum seekers, particularly from the Northern Triangle States of Central America, to the United States; to better secure and to expand the infrastructure at US ports of entry; and to adjust US border enforcement strategies in response to evolving challenges. However, the multiyear trends described in this paper suggest significant progress at the US-Mexico border, not a national emergency (White House 2019). 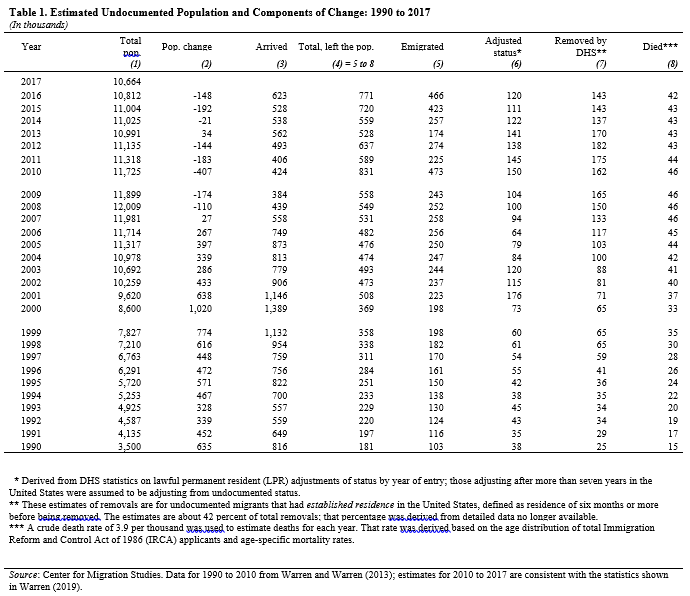 [2] Note, however, that two countries had fast-growing populations from 2010 to 2017: India, which grew by 265,000, and Venezuela, which grew by 80,000. Nearly all of the undocumented arrivals from these countries are overstays.