Previous Department of Homeland Security (DHS) estimates of overstays have not provided a sound basis for developing or implementing policies to reduce overstays. A Center for Migration Studies (CMS) evaluation of DHS overstay estimates for 2017 found that the estimates erroneously included very large numbers of nonimmigrants that departed but their departure could not be verified.[1]

Recent media reports[2] about the 2018 DHS estimates of overstays have cited estimates of overstays derived by CMS. The articles accurately report that the CMS estimates show that overstays have exceeded the number arriving illegally across the southern border (entry without inspection, or EWIs) in the past decade. Unfortunately, a significant aspect of the estimates is often omitted in descriptions of the two modes of entry into the undocumented population: overstays have exceeded EWIs in recent years not because overstays have increased more than EWIs but primarily because of the historic decline in illegal entries after 2000 — the black line in Figure 1. Moreover, significant numbers of overstays leave undocumented status through adjustment to lawful permanent resident status, emigration on their own, and (a few) death. Others are removed by DHS.

The terms EWIs and overstays refer to people that have established residence in the United States, as opposed to people that might be in an undocumented status for just a short period. Statistics on apprehensions of illegal border crossers, or on the recent rise in asylum applicants at the border, are not good indicators of the number that move to the United States each year. 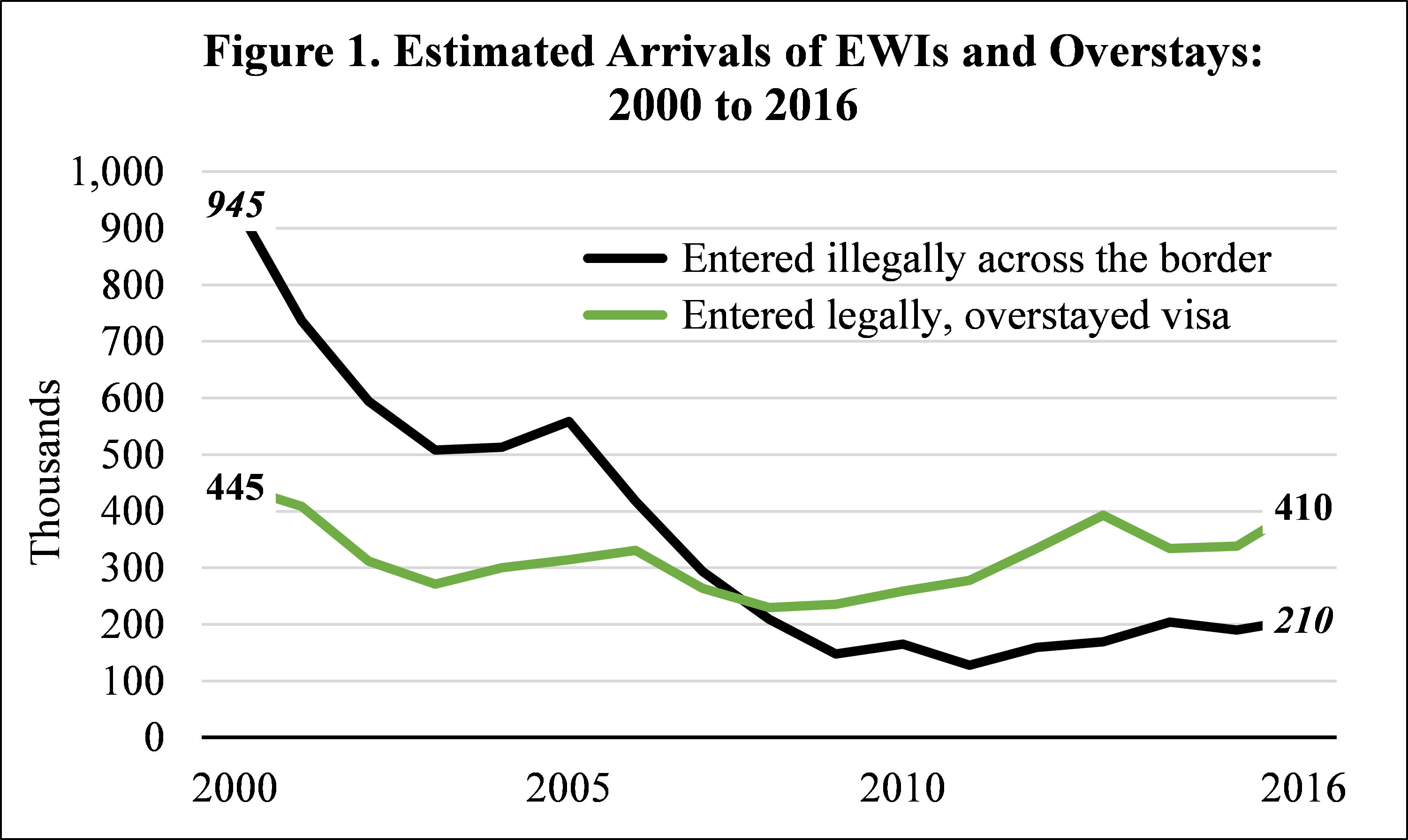 Figure 1 shows the annual number that entered legally and overstayed visas each year from 2000 to 2016. Each year after arrival, undocumented overstays are reduced as some overstays adjust to lawful permanent residence, emigrate on their own, are removed by DHS, or die. Figure 2 shows how many of those initial entrants into the US undocumented population were still living in the United States in 2017. Of the 445,000 that entered in 2000, fewer than half, 205,000, were  living in the United States and were undocumented in 2017 (Figure 2). Of the 5.5 million that overstayed in the 2000 to 2016 period, 1.7 million, or 31 percent, were no longer residing without status in the United States in 2017. 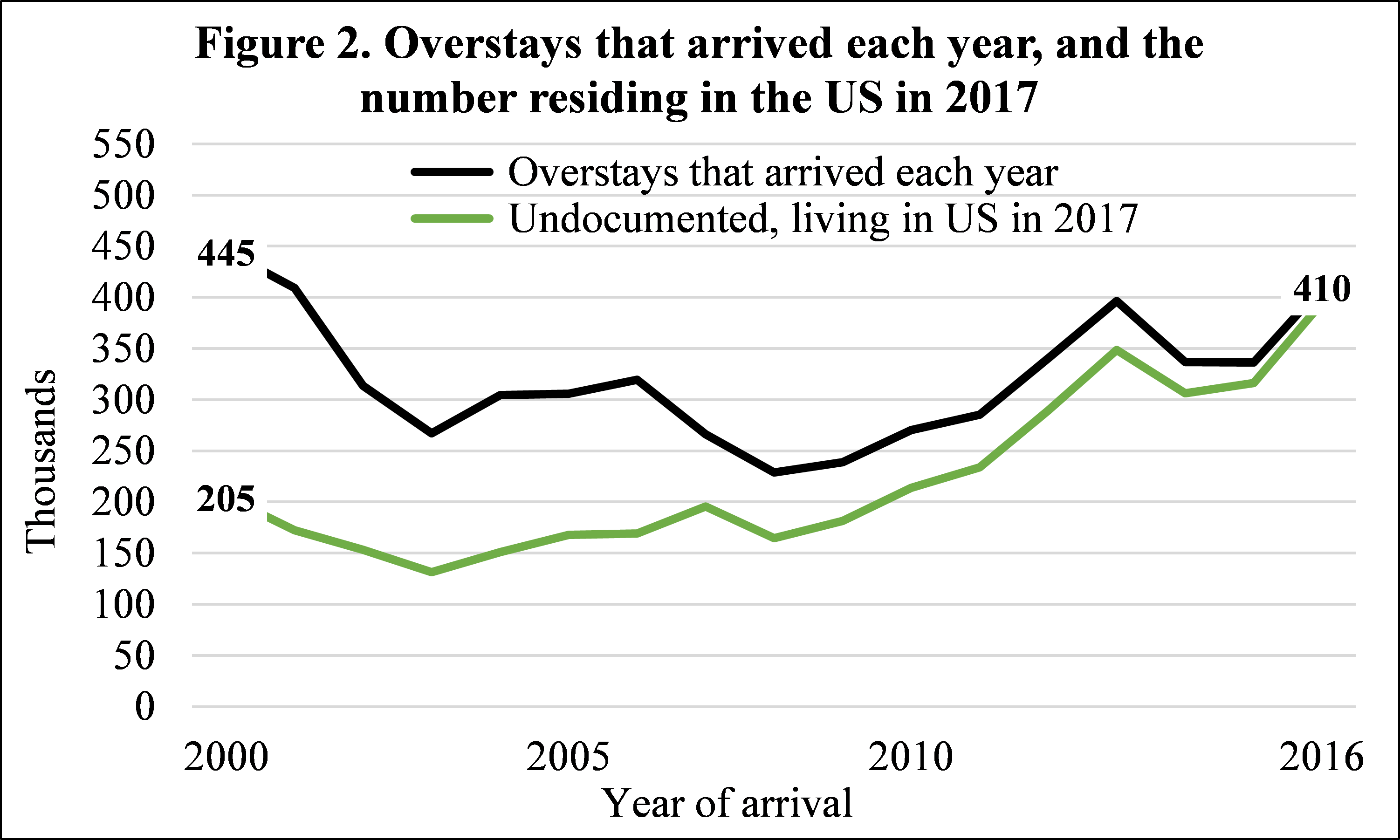 Table 1 shows the distribution, by area of origin, of the 445,000 that overstayed in 2000 and the 410,000 that overstayed in 2016. The decline in overstays from Mexico over the 16-year period was partly offset by increases from other areas. In fact, with the exception for the decline for Mexico, the figures in Table 1 did not change appreciably over the 16-year period. Note also that some of the difference between estimated overstays in 2000 and 2016 is likely due to sampling variation in the American Community Survey, the source of data for these estimates. 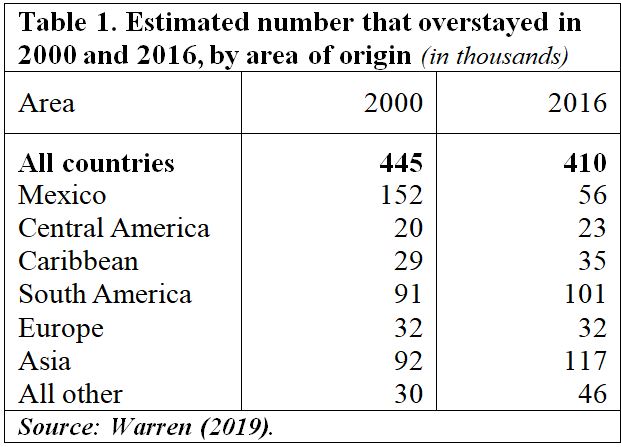 As Table 2 shows, overstays from six countries declined substantially from the 2000 to 2006 period, to the 2010 to 2016 period.[3] In the case of Mexico, the decline in estimated overstays follows the broader trend in declining arrivals from Mexico since 2000. The reason for the declines in overstays for the other countries shown in Table 2 is less clear, but the reduction in overstays could be associated with improving conditions in the home countries. 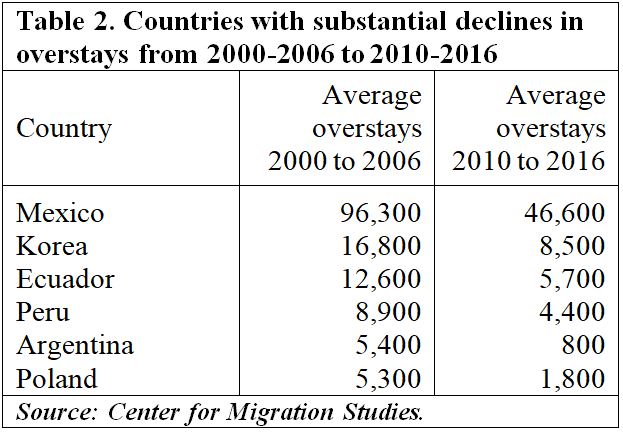 The causes and effects of declines in overstays from some countries and increases for other countries has not received sufficient attention, mostly because information about overstays has not been available to demographers or economists. Clearly, however, overstays do decline for some countries. The most likely reason is improved social and economic conditions in those countries.

[1] The CMS evaluation of the 2017 DHS estimates found that “slightly more than half of the 628,799 reported to be overstays by DHS actually left the country but their departures were not recorded” (Warren 2017). CMS has not evaluated the 2018 DHS estimates of overstays.

[3] The relatively broad six-year averages for the two time periods were used to reduce the effects of sampling variability and other possible errors.

These three tables show detailed information about the overstay population residing in the United States in 2017. The tables augment the report on overstays released by CMS on April 24, 2019.