In August 2017, the White House issued a fact sheet announcing President Donald J. Trump’s support for the Reforming American Immigration for a Strong Economy (RAISE) Act that would “prioritize immigrants based on the skills they bring to our Nation.”[1] It stated, in part:

The White House released a fact sheet with similar claims in anticipation of the president’s State of the Union address. In that address, the president stated: “It is time to begin moving towards a merit-based immigration system – one that admits people who are skilled, who want to work, who will contribute to our society, and who will love and respect our country.”

Notwithstanding this statement, the contributions and work ethic of immigrants – who work at far higher rates than the US-born, often in difficult and dangerous jobs – cannot be disputed. Instead, this paper addresses the implication that the US immigration system lowers the skill level of the US labor force. It does so by comparing the percentage of skilled workers in the legally resident foreign-born population – which consists largely of lawful permanent residents – to the percentage of skilled workers in the native-born US population.[2] Its major finding is that the percentage of skilled legally resident foreign-born workers (41 percent) is identical to that of skilled native-born workers. Other findings include:

Computing the percentage of skilled workers

The term skilled workers,[4] as used in this paper, refers to the total number of workers in the occupations listed below. These occupations were chosen because many of them require advanced degrees and training. Other occupations, such as educators, health care workers, and workers in protective services, also require extra training, and these workers make significant contributors to the public good. The major occupational categories are in bold, followed by examples from the full list of occupations.[5]

Education, training, and library. Teachers at all levels, archivists, curators, and librarians. 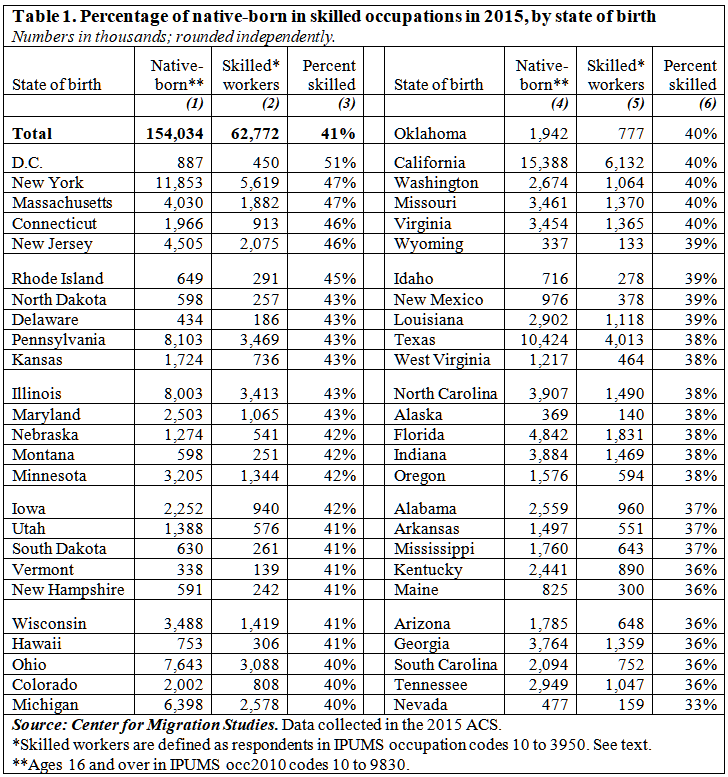 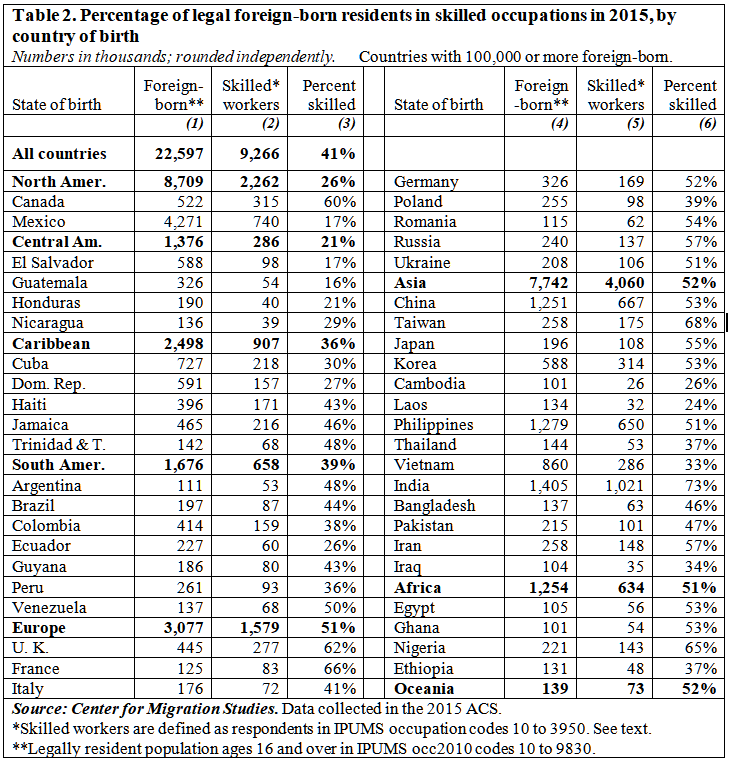 Given their wide range of demographic differences, it is likely that these immigrants acquired their skills in a variety of places and under different circumstances – some in their home country and some after arrival in the United States. Despite these very different circumstances, however, the legally present foreign-born have the same percentage of skilled workers (41 percent) as does the US born population. A total of 66 countries produce percentages of skilled workers higher than any US state.

The individual comparisons shown here are based on sample data and thus are subject to sampling error. However, the legally present foreign-born populations from all of the countries and states shown here are larger than 100,000, so sampling variability should have very little effect on the results.

The White House has suggested that the US legal immigration system lowers the skill level of and otherwise burdens the US population. The data presented here – which demonstrates that legal immigration has produced the same percentage of skilled workers as in the native-born population – should put that canard to rest. The paper also illustrates that legal residents from many of the countries the president has derided – particularly Haiti and African nations — have higher percentages of skilled workers than the US-born native population.

[2] Estimates of the legally resident foreign-born population were computed by subtracting CMS’s estimates of the undocumented population in 2015 (counted in the 2015 American Community Survey (ACS)) from the total foreign-born population counted in the 2015 ACS. Undocumented residents were subtracted from the total count of states and individual countries, as well as from the count of skilled occupations. The CMS methodology used to estimate the undocumented population is described in detail in Warren (2014).