Why is Another Category of Legally Present Immigrants Being Threatened with Loss of Status and Deportation?

The Trump administration has never spoken with a coherent voice on immigration. Its immigration initiatives have been politically driven, some of them purely symbolic (the 2,000 mile wall), others unconstitutional (a “Muslim ban”), still others longstanding national priorities (“extreme vetting” and the deportation of violent criminals). What may ultimately distinguish the administration’s immigration approach, however, is its apparent hostility to refugees and to “legal” immigrants; that is, other than the wealthy, highly credentialed elites that the president habitually attacks in other contexts. Thus, the administration has endorsed the RAISE Act, which would slash legal immigration levels, particularly for family-based immigrants. At a time of record numbers of forcibly displaced persons, it also intends to reduce US refugee admissions levels. And it has eliminated the Deferred Action for Childhood Arrivals (DACA) program, without pushing for any concrete, legislative substitute.

It now threatens to terminate temporary protected status (TPS) for Haitians and then possibly for other national groups whose countries cannot accommodate their return. TPS allows nationals from designated foreign states – those experiencing armed conflict, natural disaster, or other “extraordinary and temporary” conditions that prevent their safe return – to obtain legal status and to work. To qualify, persons from designated states must be residing in the United States on a specified date, pay a fee, register and (as necessary) re-register, and meet continuous residency and other requirements. The program – which has saved countless lives — has been used sparingly. At present, 325,000 persons from 13 nations benefit from this status. Typically, the conditions that give rise to TPS designations do not abate within the initial six to 18 month designated period, necessitating extensions.

TPS has been criticized as a temporary program that, in effect, leads to permanent residence. It would be more accurate to say that it has provided indefinite permission to remain for certain national groups. In particular, it has been repeatedly extended for qualifying nationals from El Salvador (since March 9, 2001), Honduras (January 5, 1999) and Nicaragua (January 5, 1999). However, these states represent outliers and, each year, the number of beneficiaries from them decreases due to departures from the United States, failure to re-register, and beneficiaries who obtain permanent status through non-TPS channels.

What is certain is that TPS recipients substantially contribute to US communities and are strongly vested in our nation. Revoking TPS for El Salvadorans, Hondurans and Haitians – who represent the overwhelming majority of beneficiaries (302,000) — would ill-serve their nations of origin and would be disastrous for US families and communities.

The Center for Migration Studies (CMS) will release new estimates this week that show that 53,300 TPS beneficiaries from these three nations have a close family relationship to a US citizen or LPR that potentially qualifies them for a visa.[1] Most are certainly already on a path to permanent status.[2]

Earlier this year, CMS released a report — co-authored by Robert Warren and Donald Kerwin — titled “A Statistical and Demographic Profile of the US Temporary Protected Status Populations from El Salvador, Honduras, and Haiti.” The portrait that emerges from this report is one of hard-working, long-term US residents, most with US citizen children, many on a path to permanent residency based on family ties, and a high number of them homeowners. For TPS beneficiaries from these nations, CMS found that:

Given their strong connections to the United States, it is clear that US families and communities would suffer substantially from the deportation of TPS recipients. Consider, for example, Texas and Florida, the states with the second and third highest TPS populations. In the wake of Tropical Storm Harvey and Hurricane Irma, they will require massive, multi-year reconstruction efforts, and can ill-afford the deportation of their resident construction workers. Nor can nearly 300,000 US-born children afford the loss a parent. Moreover, El Salvador, Honduras and Haiti cannot ensure the safe and productive return of their nationals. As the administration considers terminating TPS for these groups, the question arises: why add to the US undocumented population yet another category of legally present residents who are vital and contributing members of US families and communities, many of them already on a path to permanent residence?

This essay first appeared in the Huffington Post on October 1, 2017.

[1] Parts might not sum to totals because of rounding.

[2] CMS’s estimates assume that the children of US citizens, including married sons and daughters, already have citizenship. 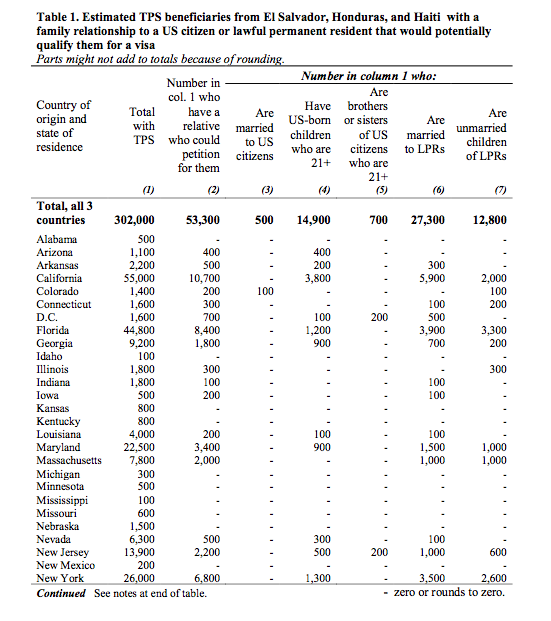 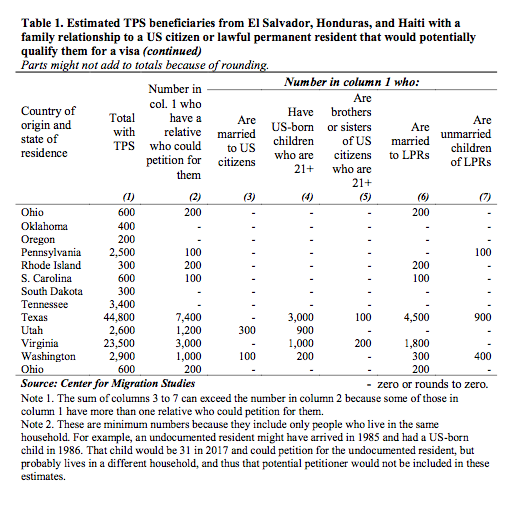 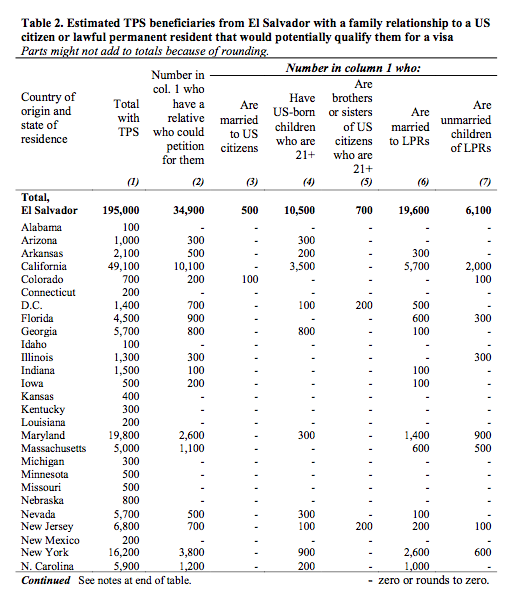 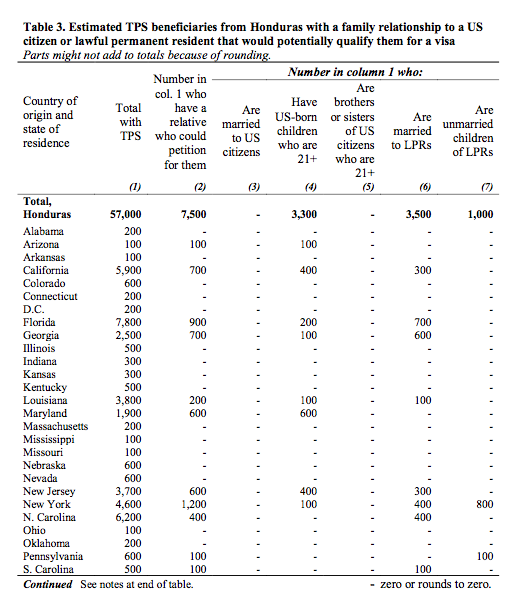 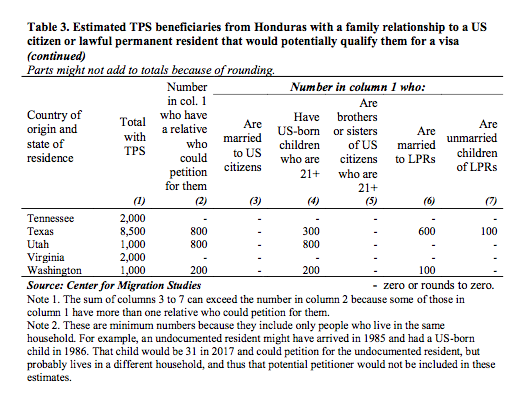 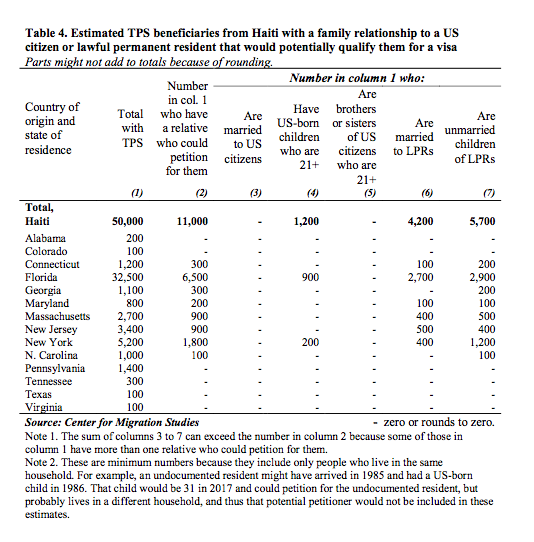