A New Upsurge in Unauthorized Immigration from Mexico Not Likely

On August 13, the Center for Immigration Studies (CIS) released a report based on data collected in the Census Bureau’s Current Population Survey (CPS). The report, available at http://cis.org/Immigrant-Population-Hits-Record-Second-Quarter-2015, stated: “After falling or growing little in recent years, the number of Mexican immigrants again seems to be growing significantly.” The report speculates that:

“… the illegal population grew significantly since 2013, when Pew and CMS last estimated its size. Of course, this represents only an educated guess. To actually estimate the illegal population in the second quarter of 2015 would require administrative data that is not yet available, as well as other information. But the evidence, while preliminary and incomplete, does indicate that the number of illegal immigrants has increased in the last two years [emphasis added].”

Even though the CIS report labels its conclusion an educated guess, its primary message is clear: unauthorized immigration is increasing significantly. The conventional wisdom holds that the Great Recession caused the unauthorized population to stop growing. This assumption, which has been shown to be erroneous,[1] is often followed by a corollary claim that when the economy improves, rapid growth will resume. The presumption of renewed growth ignores the following facts, as set forth in a recent update by Department of Homeland Security (DHS) Secretary Jeh Johnson:[2]

This report reexamines the CPS data used in the CIS report, along with DHS data on border apprehensions, to address four questions:

Table 1 shows data for the foreign-born population, for all countries and for Mexico separately, collected in the CPS from 2000 to 2015. In the table and in this discussion, the numbers are in thousands. For total foreign-born, the CIS report focused on the significant increase of 1,670 from 2014 to 2015 (column 2). Note also that in column 2 the increase in 2013 and 2014 combined was 2,745, considerably more than the average for 2007 to 2012. The CIS report interpreted these figures to portend a large increase in unauthorized immigration. However, further examination of the data shown in Table 1 indicates that the figures for the most recent years could be the result of random variability in the CPS data. For example, we can compare total population change (column 2) for three peak periods: 2000 to 2002, 2004 to 2006, and 2012 to 2014. Total change for the three periods rounds to: 3.7 million; 3.2 million, and 3.0 million, respectively. The statistical possibility that the increase of 1,670 in 2014-2015 could be followed by an increase of just a few thousand – as occurred after the two earlier peaks – suggests the need for caution in interpreting the recent increases in the CPS data.

The same reasoning applies to the annual change data for Mexico shown in column 4 (Table 1). The increase (thousands) in 2005 and 2006 combined was 997; in the most recent two years, it was 921. In the earlier period, the two-year increase was followed by an increase of 80.

In summary, the large increases in the data for the foreign-born population over the past two years are consistent with random variations observed in the CPS data over the past 15 years. However, we would be remiss if we did not consider the possibility that the data really do portend a new upsurge in unauthorized immigration. For that, we turn to question 2.

At first glance, the data on border apprehensions for the past few years (Figure 1[3]) reveals an apparent “upsurge” in apprehension activity in FY 2014. Could this be the long-anticipated upturn? 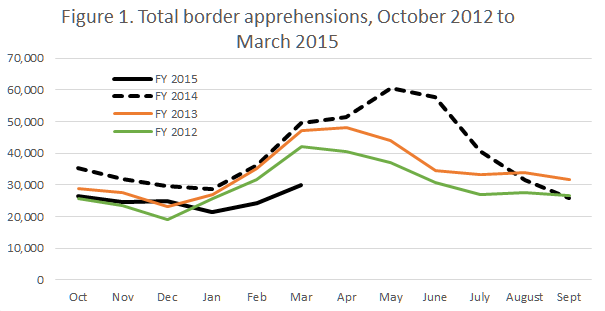 In Figure 1, the number of apprehensions in May, June, and July 2014 (combined) was 47,700 higher than the total for the same period in 2013. This might be interpreted to indicate that border crossings surged in 2014; a closer examination of the border apprehension data, however, points to a different explanation for the “bump” in 2014.

Figure 2 shows the number of apprehensions of unaccompanied minors and family units (DHS term) in the same time periods shown in Table 1. As Figure 2 shows, the increase in total apprehensions was the result of an increase in apprehensions of unaccompanied minors and families in the summer of 2014. The data for the first six months of FY 2015 followed the patterns for earlier years, and apprehensions remained below the pattern observed in 2014. It should be noted that the spike in arrivals of unaccompanied minors and families in 2014 could account for approximately 85,000 of the increase in the total foreign-born population in 2015 reported by CIS. Note, however, that although they are likely to be included in the CPS data for the foreign-born population, a substantial percentage of this population has sought or will seek political asylum and, thus, should not be considered unauthorized immigrants. 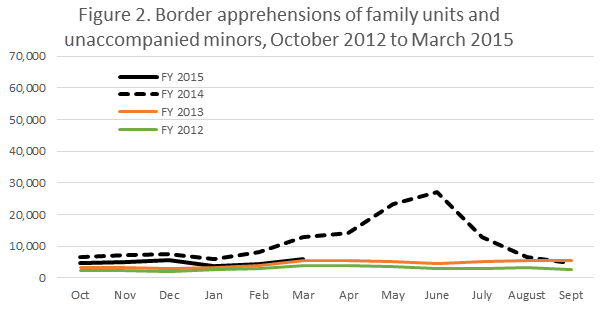 If, in fact, there had been a large increase in unauthorized immigration from Mexico in 2014 and 2015, not yet in the range of current estimation methodologies, it should manifest itself as an increase in apprehensions of individuals at the border. Single adults account for 70 to 90 percent of all apprehensions. Figure 3 shows DHS statistics for this group. As Figure 3 shows, apprehensions of single adults in FY 2014 were remarkably similar to apprehensions in the previous two years. The most interesting feature of Figure 3 is the noticeable drop in apprehensions in the first three months of 2015 – the period in which the unauthorized population from Mexico was reported to be increasing significantly. Although apprehensions are not perfectly correlated with arrivals of unauthorized immigrants, it is unlikely that migrants suddenly became very successful at evading the Border Patrol, especially in light of the significant investments in border control over the past decade (see above). To summarize, the monthly apprehension data for October 2011 to March 2015 provides no support for the assertion that unauthorized immigration from Mexico has increased noticeably in the past couple of years.

The apprehension data discussed in the previous section suggests that a resurgence in unauthorized immigration has not begun. In this section we examine a demographic phenomenon that affects the estimates of the unauthorized resident population.  Although its relevance to the present discussion is pronounced, no direct information about this component of population change is being collected and, thus, its net effects on population estimates is assumed to be zero.

Under normal circumstances (before 2008), the net effect of multiple migration probably is small or is partially taken into account by assumptions about emigration. In those cases, the lack of data would not have much effect on the estimates. However, it is possible that the effects of the Great Recession and subsequent recovery engendered this kind of departure in 2008 to 2010, followed by subsequent return – of both legal and unauthorized residents – to the United States.

Even though there is no direct information about “multiple migration,” we can demonstrate its effects by examining the CPS data shown in Table 2. All of the immigrants shown in Table 2 entered the United States in the 2000 to 2005 period. After entry, their numbers should diminish each year as some emigrate and some die. Thus, in the absence of multiple migration, the annual numbers in columns 2 and 4 would all be negative, and they would be fairly smoothly distributed.[4] Obviously, that is not the case.

In summary, if large numbers of previous immigrants, legal as well as unauthorized, had not returned in the 2012 to 2015 period, all of the numbers in columns 2 and 4 for those years would have been negative. Although the lack of administrative data on multiple migration makes it difficult to quantify its exact effects,[5] multiple migration appears to be a demographic factor that explains some of the CIS findings.

Before leaving the topic, we should make one more important point: multiple migration occurs to both legal and unauthorized residents. It is not possible to separate the two streams of migrants. However, it is possible that repeat migration would be more likely to occur among legal residents than unauthorized residents because their documents would make their return considerably easier. Keep in mind, also, that legal residents comprise about three quarters of the total foreign-born population.

It is highly improbable based on: (1) the essentially unchanging patterns of apprehension data in the past few years; (2) the fact that the higher numbers in 2014 and 2015 are within the range of previous random fluctuations in the CPS data; and (3) the likelihood that the numbers for recent years partially reflect the return migration of previous legal residents; and (4) the fact that at least one of the conditions that brought about the significant reductions in unauthorized immigration over the past 15 years – enhanced immigration enforcement – is still in place and in fact has been augmented in recent years.

[3] Note that the vertical scale of 0 to 70,000 is used in all of the graphs shown here to assure comparability of the data.

[4] Of course, sampling variability would cause the annual numbers to vary somewhat, and a positive difference would not be out of the question.

[5] A full description of the effects of “multiple migration” and especially its effects on the residual method of estimating the unauthorized resident population is beyond the scope of this report. However, this analysis has shown that multiple migration is an important variable that has the potential to distort estimated population trends. As such, it merits further investigation.