Individuals self-identify their race and ethnicity on Census questionnaires. For example, individuals can self-identify as Asian with respect to race and non-Hispanic with respect to ethnicity. Whereas much focus has been paid to the “Asian alone” category, this paper uses a broader definition of AAPI which combines  “Asian alone,” “Pacific Islander alone,” Asian and Pacific Islanders who also identify as Hispanic (e.g., a person of Japanese ancestry born in Peru), and multi-race AAPIs.

The data used in this paper are the 2013 American Community Survey (ACS) Public Use Microdata Sample (PUMS) 1-year estimates. These data, which include over 3 million weighted individual observations, include “likely unauthorized flags per the Warren (2014) estimation method. The PUMS data combined with unauthorized flags permit the identification of areas of need at the Public Use Microdata Area (PUMA) level. A PUMA is a geographic area containing about 100,000 people. For example, while it is helpful to know how many undocumented immigrants live in Los Angeles County, because Los Angeles County is home to roughly 10 million people and covers just over 4,000 square miles, it is perhaps more helpful for outreach purposes to know how many undocumented immigrants live in Koreatown or in Rosemead. PUMA-level analyses provide this level of detail.

The top 5 states when it comes to undocumented AAPIs are the immigrant gateway destinations of California, New York, Texas, New Jersey, and Illinois. However, as Table 1 shows, a diverse set of states ranging from the Northwest (Washington) to the South (Georgia) round out the top 10. 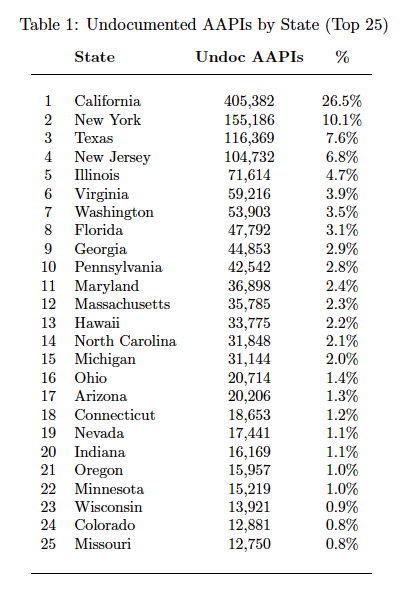 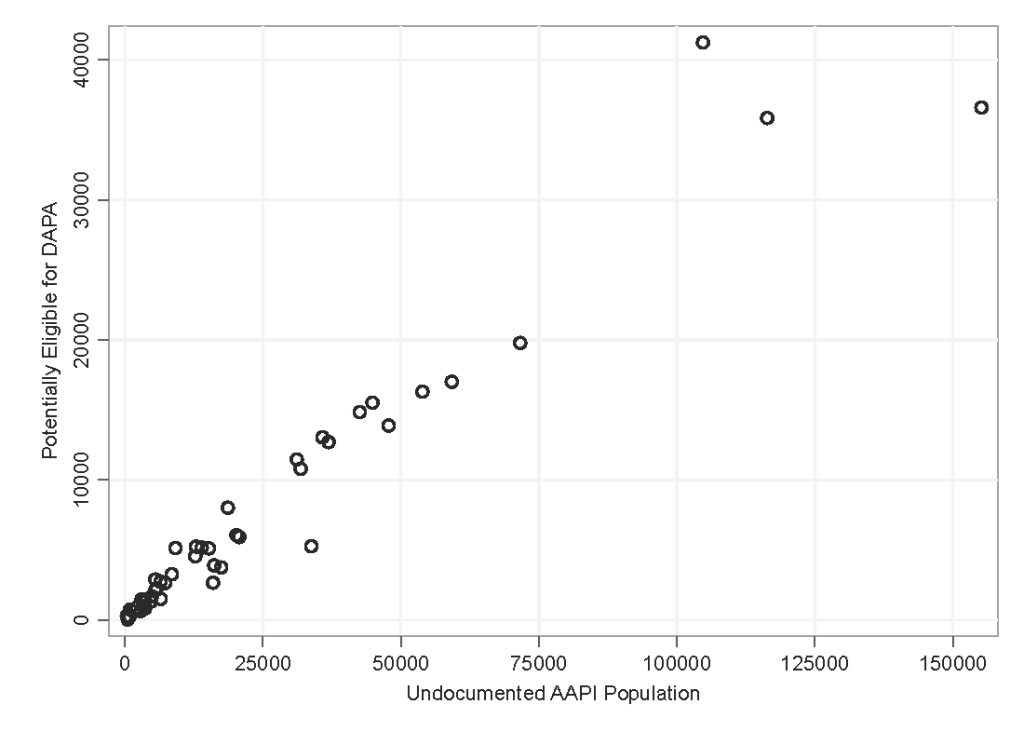 China, India, the Philippines, Vietnam, and Korea (in order) currently represent the top 5 countries of origin when it comes to immigration to the U.S. from Asia. They also represent the top 5 countries of origin for the undocumented AAPI population. As Table 2 shows, India represents the largest national origin group among the undocumented APPI population, followed by China, the Philippines, Korea, and Vietnam. These countries combine to account for 81.9% of the total estimated undocumented AAPI population. Note: state-by-state and PUMA level breakdowns are available by national origin group.

Recently released PUMA-level data provides important new insights about the size and the characteristics of the undocumented population. Using these data, I identify areas of need at the PUMA level, wherein the undocumented AAPI population is characterized by low English language use, high poverty rates, and low educational attainment. Whereas outreach to undocumented AAPIs can be a simple function of population size, these characteristics may be indicative of undocumented AAPI communities wherein targeted outreach related to administrative relief can be most impactful. I note here that different models can identify areas of need for the undocumented AAPI population more generally (e.g., exclude the number potentially eligible for administrative relief from the analysis). Moreover, additional models can be run that identify different sets of needs (e.g., include the number of undocumented AAPIs that do not have health insurance in the analysis). This analysis is intended to identify places that may not be the “usual suspects” in terms of outreach to undocumented AAPIs. Because this analysis relies on population estimates at small geographies, it should be seen as a complement to outreach strategies that use population size as a main determinant. Benchmarking the results of this analysis with local knowledge on the ground is, perhaps, the most effective way to utilize these data.

A list of all 50 areas of need is available here and by request to [email protected].