The death of seven year-old Jakelin Amei Rosmery Caal Maquin in December of 2018 while in US Border Patrol custody has led to outrage, frustration, and a host of unanswered questions. We know that she and her father were apprehended at 9:51 p.m., but Jakelin was not admitted to Providence Children’s Hospital in El Paso until 8:51 a.m. the following morning. Other than that, the public awaits credible information on the cause of her death and, in particular, whether she perished because of Border Patrol failure. Beyond this tragic case, our research — which consists of more than 1,100 post-deportation surveys with unauthorized Mexican migrants — suggests that the denial of medical attention to migrants in US custody is a widespread and systemic problem, and one that appears to affect indigenous language speakers disproportionately.

As part of the Migrant Border Crossing Study (MBCS), we surveyed 1,109 recently deported Mexican migrants who crossed the border without documents, were apprehended, and deported to Mexico. From 2010-2012, we completed surveys in Tijuana and Mexicali, Baja California; Nogales, Sonora; Ciudad Juárez, Chihuahua; Nuevo Laredo, Tamaulipas; and Mexico City — achieving a response rate of over 90 percent. The cities where we worked received 65 percent of all deportees along the US-Mexico border during the study period.[1] In addition to this research, in 2017 we conducted 97 surveys with recently deported, unaccompanied Mexican minors in Matamoros, Tamaulipas and Nogales, Sonora. While this is a small sample, we will include some of this data as it is relevant to this case.

Although Jakelin is from Guatemala and our data refers to Mexican nationals, it is important to note the broader trends in access to medical care while in US custody, as well as issues facing indigenous language speakers. We expect that our findings on the treatment of Mexicans would hold true for Central Americans as well.

Medical Attention While in US Custody

We have conducted research on unauthorized Mexican migration for more than a decade. Over the years, we were eyewitnesses to a host of problems, such as people being deported with injuries and in poor condition, some unable to walk, and many dehydrated and hungry. On several occasions, we interviewed people who had just hours before been released from surgery. For instance, one young man had fractured his vertebrae while crossing the border in the desert, but was deported the same day as his spinal surgery. In a separate case, a man was deported with a broken collarbone protruding from his skin.

In our survey, 23 percent of 1,109 deportees said that they needed medical attention while in US custody (see Table 1). However, of those who needed and asked for medical care, more than one in three, or 37 percent, were denied, suggesting the systematic denial of care for those who request and need it. Among unaccompanied minors, we found nearly the same percentage of people (38 percent) who needed medical attention, asked for it, but were refused.[2] It is important to note that these figures only include persons who never received care during their time with the authorities. They do not include instances when care was withheld or delayed, which of course can also cause significant harm. 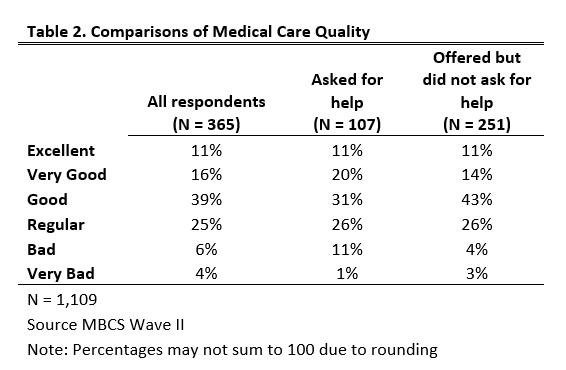 Moreover, we found a disparity between those who asked for medical attention and those who were offered and received routine care. For instance, if a migrant stated that they had asked for care, 12 percent described the quality of care they received as “bad” (11 percent) or “very bad” (1 percent) (see Table 2). On the other hand, among respondents who were offered and received medical attention (but did not necessarily need and ask for it), only 4 percent stated that the care was “bad” and 3 percent “very bad.” This disparity may be due to the severity of the illness or injury of those requesting care. Whereas treating blisters, mild dehydration, lacerations, or migraines may be relatively routine, some of the more serious illnesses or injuries we have witnessed — for which migrants may be more likely to request care — would require more complex treatment. However, the possibility remains that federal officials punish migrants who complain and speak out on their need for care, both by withholding care and reducing the quality of care. Our robust evidence of systematic neglect indicates a chronic failure of performance and accountability by US Customs and Border Protection (CBP), an agency that receives massive public resources and is entrusted with crucial national responsibilities.

We can speculate, but cannot prove why this disparity holds in our data. Communication gaps likely occur between indigenous peoples who speak Spanish as a second language, often with serious limitations, or who do not speak Spanish at all, and US officials who may or may not be proficient in Spanish.[3] Border Patrol officers, but not other CBP officers or Immigration and Customs Enforcement (ICE) officers, undergo Spanish testing and training, but not in other languages they may encounter. These linguistic problems certainly increase the logistical difficulty and complexity of attending to the needs of migrants, especially those with dire medical needs. Immigration officials may also lack familiarity with and be prejudiced against Latin American indigenous peoples, who are stigmatized groups in North and Latin America.

It should also be noted that this problem is bigger than any individual agent who may ignore or delay responding to a migrant’s request for medical assistance. We have also documented dozens of stories of agents saving people’s lives in the desert. As scholars, we seek to go beyond the sole-cause characterization of Jakelin’s death as the result of one or multiple agents who may have been inattentive to her needs. Rather, we point to a lack of a formal process to guarantee the safety of migrants post-apprehension. Too often, complaints about the Border Patrol are dismissed as the case of a few bad apples, rather than an institutional problem for a multibillion-dollar federal agency that has failed to provide adequate conditions, transparency, and timely and effective emergency response processes for agents on the ground. The denial of more than one in three requests for medical aid is not a problem that can be addressed by individual agents. Rather, it requires the attention of the entire agency. For instance, the fact that Jakelin’s father was forced to sign a form in English stating that he and Jakelin were in good health has been used to absolve the Border Patrol of wrongdoing. This is absolutely unacceptable and points again to the systematic mistreatment of indigenous people.

Finally, we emphasize the policy context of Jakelin’s death. Asylum seekers are being bottlenecked at ports of entry, where they are admitted to the United States in extremely limited numbers or stopped from initiating their asylum requests entirely. As a result, they are attempting to cross the border in risky ways, and at remote places in order to initiate an entirely legal request for asylum. This new pattern of government-created risk to asylum seekers reproduces a previous death- and injury-generating policy in which concentrated enforcement infrastructure and resources push unauthorized migrants into dangerous desert and mountain terrains. Attending to the needs of people after they cross the border is only a Band-Aid on the larger problem of using border enforcement to put people in harm’s way so they will be prevented and others will be deterred from migrating to the United States and seeking asylum. Arrival at US borders seeking asylum, as Nery and Jakelin Caal were doing, is an entirely legal process, for which we need open and safe channels. We must end the policy of deterrence by the use of delay, displacement, and risk to life and limb. Directing substantial resources to adding capacity to ports of entry would be an important first step. And when this is done, CBP (Border Patrol and Port officials) needs to be held to high performance, transparency, and accountability standards

[2] This is a small sample size however, as only eight out of 97 children needed medical attention but only five of them received medical care.

[3] However, it should be noted that our survey is conservative in this regard because we were unable to interview monolingual indigenous language speakers. One of the criteria for inclusion in the survey was Spanish or English proficiency. However, children commonly helped to translate for their parents.