Immigration is an important national issue, and its importance is heightened because of the presidential election. This report reviews the latest information available about the growth of the foreign-born population and provides information about recently arrived temporary residents in the population. Foreign-born population growth, legal and undocumented, as well as new arrivals, have remained fairly stable over the past few years.

Reports issued this year have provided conflicting information about recent patterns of growth in immigration. In a June 2016 report, the Center for Immigration Studies (CIS) argued that the “latest Census Bureau data shows that the scale of new immigration is clearly enormous” and that there was “a significant increase” in legal and undocumented arrivals in 2014 and 2015. In August 2016, the Center for Migration Studies (CMS) reviewed the CIS report and concluded that any recent increases in immigration were likely the result of: (1) an increase in temporary admissions, mostly students and temporary workers and their families; and (2) the arrival of immigrants (overwhelmingly those with legal status) who resided in the United States in previous years, left for some period, and returned.

New information – foreign-born population data from the 2015 American Community Survey (ACS) – has become available since the CIS report was released. The ACS count was 43.3 million in 2015 compared to 42.4 in 2014, an increase of 900,000. The CIS report of a surge in immigration in 2014 and 2015 was based largely on data from the Census Bureau’s much smaller Current Population Survey (CPS) that indicated a 1.8 million increase in the foreign-born population from 2014 to 2015 (Camarota 2016b, Figure 6). Because of its large sample size, the ACS is a much more reliable indicator of population change than the CPS.

The increase of 900,000 in the foreign-born population in 2015, based on ACS data, is almost 200,000 fewer than the average number admitted for lawful permanent residence (LPR) from 2005 to 2014 (Baker 2014). Foreign-born population growth is less than the number of LPR admissions because of emigration and because net undocumented immigration has been at or near zero since 2009.

A new report by the Pew Research Center shows that the undocumented resident population has been “steady since 2009” (Passel and Cohn 2016). The Pew report confirms similar estimates published by CMS earlier this year (Warren 2016b).

In summary, foreign-born population growth is less than the number of LPRs admitted, and growth remains below the pre-recession levels. Also, the undocumented population has been stable since 2009. Given that, the question arises, “What could account for the relatively higher numbers for 2014 and 2015 reported by CIS?” As the following discussion shows, it is likely that the increases reported by CIS were largely the result of temporary residents being included in the CPS data that CIS used.

DHS nonimmigrant arrival data are the starting point for the CMS procedure for estimating the temporary resident population. Table 1 below illustrates the procedures that CMS followed to estimate the population of foreign-born students in 2012, 2013, and 2014. The estimate of 720,000 nonimmigrant students shown in Table 1 is comparable to the estimate of 760,000 from Open Doors (Institute of International Education) (see Table A2-1 in the DHS estimates for 2012; Baker 2014).

The CMS procedure approximates a method developed by the former Immigration and Naturalization Service (INS) and currently used by DHS.[1] Based on careful analyses of detailed data on length of stay of all classes of nonimmigrants for an eight-year period, the DHS method translates nonimmigrant entries into the demographic concept of “years lived” in the United States, and thus population estimates (Baker 2010). DHS uses its estimates of the temporary resident population not only for describing the characteristics of that population but also as an important component in deriving its residual estimates of the undocumented population.

As Table 1 shows, the estimation procedure begins with the number of admissions of students and their families (hereafter, students) in 2012 – 1,654,000. Obviously, that figure is not an estimate of the student population because it includes multiple entries as well as stays of less than one year.

The ratio of 44 resident students to 100 entries in 2012 is assumed to apply to student entries in 2013 and 2014. There is no reason to believe that there have been any changes in admissions procedures or in the flow of foreign students that would have much effect on this ratio. Thus the estimated number of students increased from 720,000 in 2012 to 727,000 in 2013 and to 800,000 in 2014 (Table 1). The same kinds of procedures were followed to derive estimates for other classes[2] of nonimmigrants that might stay in the country long enough to be included in the ACS.

In summary, CMS used accepted statistical procedures to derive estimates of the temporary resident population and thus to estimate change from 2013 to 2014. The estimated total temporary resident population grew by 229,000, from 1,806,000 in 2013 to 2,035,000 in 2014 (Warren 2016a). After assuming that 10 percent of both numbers would be missed by the ACS, population increase was estimated to be 206,000. This figure fully accounts for CIS’s projected increase in foreign-born arrivals in 2014.

The next step is to determine whether CIS’s reported increase in foreign-born arrivals in 2014 could have occurred because of temporary residents being reported in the CPS. Unfortunately, the CPS sample is not large enough to support the kinds of analyses described in the next section; however, we include the following ACS-based analysis to show that, indeed, temporary residents are included in Census Bureau surveys.

Figure 1 shows ACS counts of legal[4] foreign-born residents who entered each year from 2005 to 2009. The purpose of Figure 1 is to demonstrate that the ACS counts the temporary resident population and that it measures population change. The broken line shows the number counted in the 2010 ACS, and the solid line shows the same entry cohorts measured again in the 2014 ACS. A total of 638,000 were counted in 2010 (the sum of the values at the five data points on the broken line). When these same cohorts were counted in the 2014 ACS, the total had dropped to 481,000 (black line in Figure 1) Thus, the cohort of 638,000 legal foreign-born residents counted in 2010 had declined to 481,000 by 2014. That is, as many as 150,000 temporary residents who were counted in 2010 had left the country by 2014. The pattern[5] of the data shown in Figure 1 demonstrates that temporary residents are included in the ACS data. 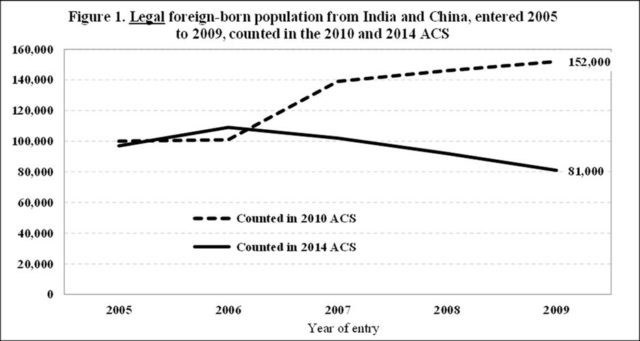 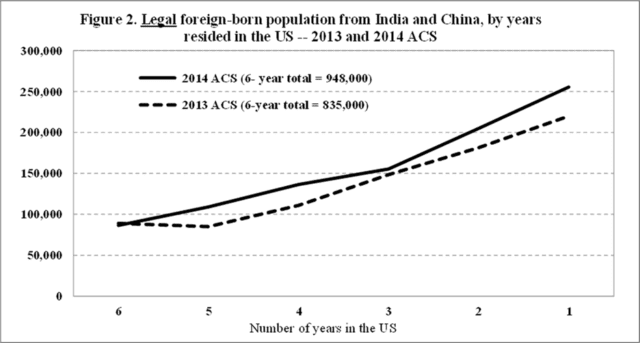 In Figure 2, the data were derived from 2013 and 2014 ACS counts of the legal foreign-born population that entered the country in the most recent six years.[6] The upward slope in the lines in Figure 2 indicates the presence of temporary residents in the data. That is, the higher numbers for the most recent years are not the result of increasing LPR admissions. LPR admissions from the two countries combined have been essentially flat in recent years. The most recent DHS data on LPR admissions from China and India combined were 142,000, 158,000, 150,000, and 142,000. As noted, undocumented residents are not included in the data described here. Therefore, the difference of 113,000 between the 2013 total (835,000) [7] and the 2014 total (948,000) reflects an increase in the ACS count of temporary residents in 2014 compared to 2013.

The latest and most reliable information reported here indicates that foreign-born population growth, both legal and illegal, has been stable since 2009. The CIS report of a surge in immigration in 2014 and 2015 was based largely on data from the Census Bureau’s relatively small Current Population Survey that indicated a 1.8 million increase in the foreign-born population from 2014 to 2015. The 2015 data from the much larger American Community Survey shows that population growth from 2014 to 2015 actually was about 900,000, or half of the growth indicated by the CPS. In addition, the undocumented population declined from 12 million in 2008 to fewer than 11 million in 2014, and population growth has remained essentially flat over the past few years.

The analysis of ACS data by year of entry (Figures 1 and 2 above) demonstrates that Census Bureau surveys measure annual changes in newly arrived temporary residents. It also suggests that the increase in foreign-born arrivals in 2014 and 2015 reported by CIS could have been the result of temporary residents being included in the CPS but having departed before all of the 2015 ACS data were collected.

We conclude on a cautionary note. For countries with large numbers of temporary residents, survey data can make it appear that immigration has been increasing rapidly in the most recent year or two. For those countries, we cannot know the actual size of new entry cohorts until a few years have passed and the temporary residents have departed. Thus, caution should be exercised in concluding that immigration has increased based on data for the most recent years, and especially based on data from the CPS.

[2] The other classes were treaty traders and investors, NAFTA professional workers, other temporary workers and trainees, intracompany transferees, and fiancés, spouses and children of citizens and permanent residents.

[3] The legally-resident data for China and India (combined) used in this section were derived by subtracting DHS’s estimates of undocumented residents counted in the ACS (see Warren 2014) from ACS data for the foreign-born population. Data are available by single year of entry for each country from both sources.

[4] The use of data for the total foreign-born population in Figure 1 would have very little effect on the graph. Legally resident population data were used because legal residents are being discussed.

[5] “Pattern” means that the two lines in Figure 1 are in the configuration that we would expect when observing a temporary resident population – the lines are widest in the most recent year (the large, most recently arrived population), and the lines become closer in each subsequent year in the United States.

———. 2014. Estimates of the Size and Characteristics of the Resident Nonimmigrant Population in the United States: January 2012. Washington, DC: DHS, Office of Immigration Statistics.

———. 2016a. “Surge in Immigration in 2014 and 2015? The Evidence Remains Illusory.” CMS Essay, August. New York: Center for Migration Studies. https://cmsny.org/publications/warren-immigration-surge-illusory/.