The US Undocumented Population Fell Sharply During the Obama Era: Estimates for 2016

This report shows estimates of the undocumented population residing in the United States in 2016, by country of origin and state of residence. Previous CMS reports have documented the long-term change from rapid population growth in the 1990s, to single-digit rates of growth in 2000 to 2010. This report shows continued declines in the population from most countries and in most states since 2010. Major findings include the following:

In the myriad discussions of undocumented immigration over the past two years, two of the most significant and underreported facts are that: (1) after 2000, arrivals from Mexico dropped sharply, falling to their lowest levels since the 1970s; and (2) the total population, as well as the population of most of the states and countries of origin, are lower now than they were in 2010. This report provides evidence that the historic shift from growth to decline continued in 2016.

The report shows new estimates of the undocumented resident population in the United States in 2016, by country of origin and state of residence. The estimates were derived by the Center for Migration Studies (CMS) based on information collected in the US Census Bureau’s annual Current Population Survey (ACS). The procedures used to derive the estimates are outlined in the Appendix and are described in detail in Warren (2014). In addition to the estimates for 2016, the report includes estimated population change since 1990 for 18 countries that had more than 50,000 residents in the United States in 2016.

The estimates for Mexico are shown first because they illustrate a theme of this report: prior to the current administration, undocumented population growth declined steadily across several administrations. In addition, the estimates for Mexico shown in Figure 1 refute the idea that discussions of legalization, or providing work authorization to hundreds of thousands (DACA), run the risk of increasing undocumented immigration. In the 2010 to 2016 time period covered by Figure 1, large-scale legalization programs were proposed by Congress and the DACA program was implemented. Yet, the undocumented population from Mexico continued its steady decline. By 2017, the US Department of Homeland Security announced that the southwest border was “more difficult to illegally cross today than ever before” (DHS/OIS 2017, 19). 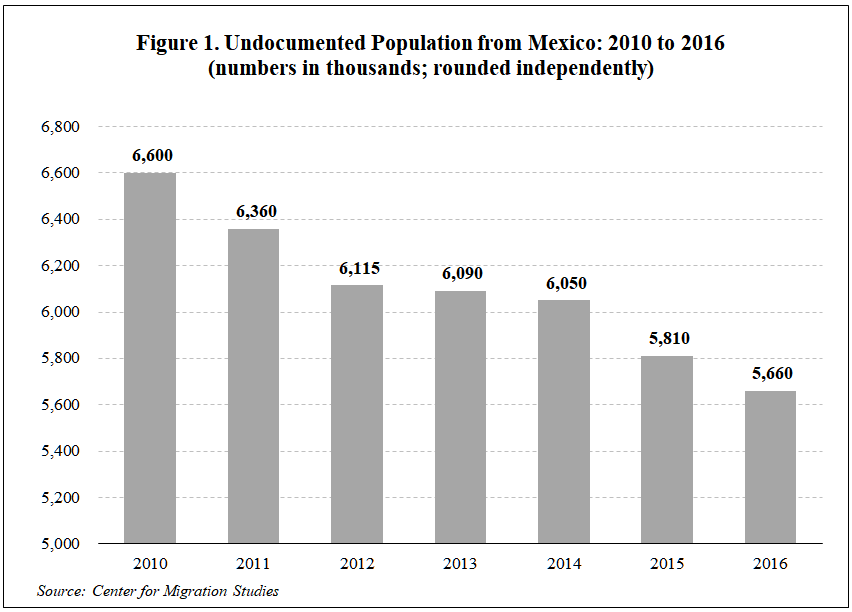 The 2016 Estimates in Historical Perspective

The figures in columns 5, 6, and 7 of Table 1 clearly illustrate the broad and sustained decline in population growth since the 1990s. In 1990 to 1999, the total undocumented population grew at an annual rate of 15 percent per year, and some countries — India (56 percent), South Korea (50 percent), and Brazil (36 percent) — grew at much higher rates. In the 2000 to 2010 period, the annual growth rate dropped to single digits for every country except Honduras and India, which grew by 11 percent and 10 percent, respectively. From 2010 to 2016, the population of 11 of the 18 countries fell, and the six that were still growing were in the range of only 1 to 5 percent (Table 1). As a result of these declines, the total undocumented population dropped by 935,000 from 2010 to 2016. 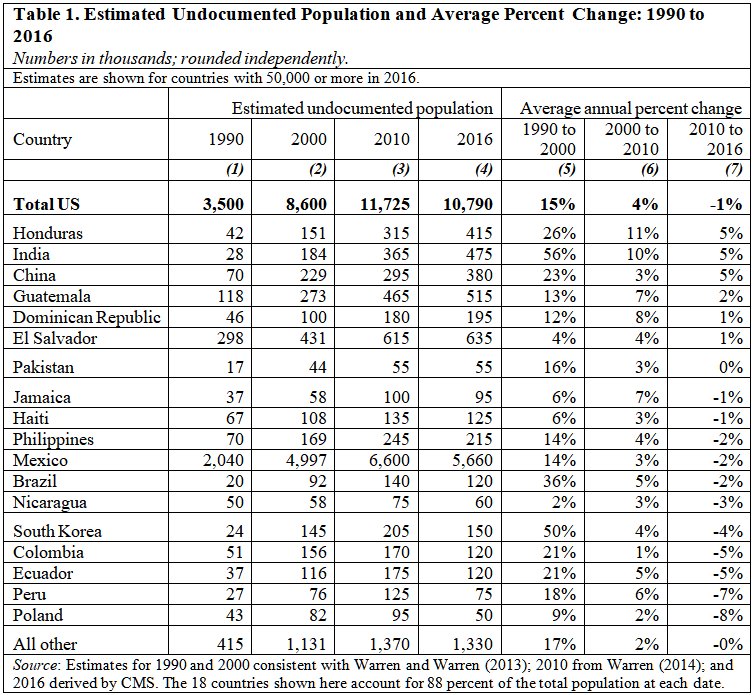 The general decline indicated by the data in Table 1 did not occur evenly across regions of origin. As Table 2 shows, the population from North America (principally Mexico), South America, and Europe declined by 14 to 23 percent from 2010 to 2016, while the populations from Asia, Central America, and Africa increased by 8 to 10 percent.

The increases for Asia, Central America, and Africa were principally the result of growth from two countries in each area: China and India in Asia; Guatemala and Honduras in Central America; and Ghana and Nigeria in Africa.

Obviously, the drop for North America reflects the decline from Mexico. The population from South America fell because of declines in the four major South America sending countries — Brazil, Colombia, Ecuador, and Peru. Combined, those four countries declined from 610,000 in 2010 to 435,000 in 2016, a drop of 175,000, or 29 percent. The largest contributor to the decline from Europe was the population from Poland, which fell sharply, dropping by almost half, from 95,000 to 50,000, in the 2010 to 2016 period. 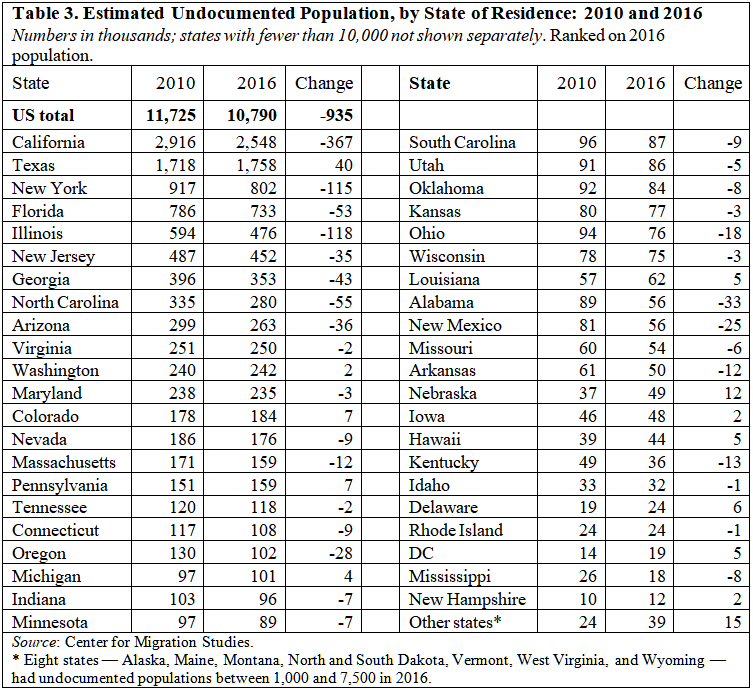 Table 4 shows how the populations from different countries changed within the seven states that had the largest population change from 2010 to 2016. In most cases, the decline of the undocumented population from Mexico was the principal determinate of population change. 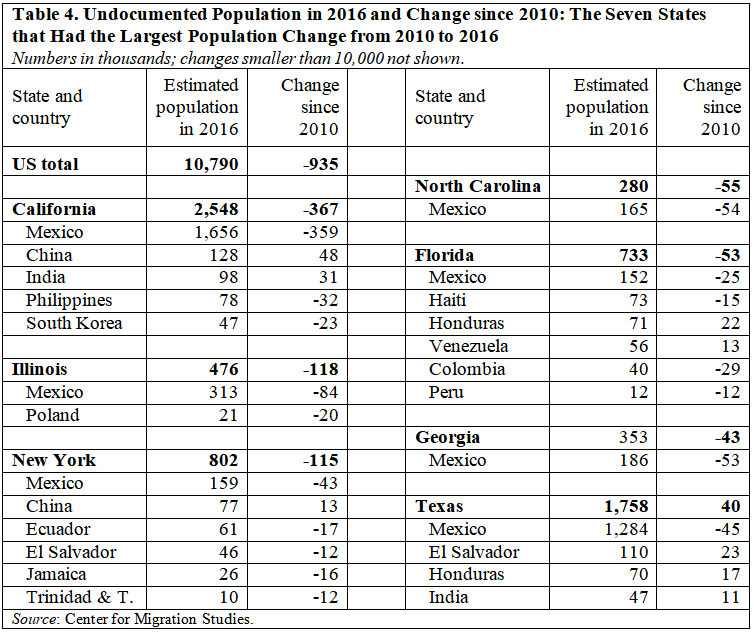 The figures shown here indicate that the long-term trend in undocumented population growth continues in a downward direction. Even though the populations from Honduras, India, and China have grown at a rate of five percent per year since 2010, their growth rate is far below their comparable rates in the 1990s. From 2010 to 2016, the population from Jamaica, Haiti, the Philippines, Mexico, Brazil, Nicaragua, South Korea, Colombia, Ecuador, Peru, and Poland all declined. The cause of these declines is outside the scope of this paper. However, two major contributing factors probably were the increased scrutiny of air travelers after 9/11 and the immense increase in enforcement along the southern US border.

The evidence of a widespread and sustained decline in undocumented migration to the United States is irrefutable. In a more fact-based era, this would be recognized as a major national accomplishment. Moreover, the steady decline in the population since 2010 refutes the recurrent argument that consideration by Congress of an earned legalization program or the DREAM Act, or even the establishment of the Deferred Action for Childhood Arrivals (DACA) program — all of which occurred during this time-frame — invariably leads to increased undocumented immigration. In addition, as previously documented by CMS, the United States has turned a significant corner in immigration enforcement. The remaining US undocumented population has extremely long tenure, strong equitable ties, and firm roots in the United States.

As CMS has previously argued, a large percentage of the undocumented population should be permitted to legalize their status (Kerwin and Warren 2017, 320-21). Moreover, the combination of “a well-structured legalization program, strengthened legal immigration system, and strong enforcement policies can prevent the reemergence of a large-scale undocumented population” (ibid., 298). By contrast, draconian cuts in legal immigration and a mass deportation program would create a strong incentive for illegal migration by those deported away from US family members or who are unable to unify with close US citizen or lawful permanent resident family members through legal channels.

Estimation of the undocumented population begins with the reported characteristics of non-US citizens (henceforth, noncitizens) in the micro data of the ACS. The three relevant data items from the survey are country of birth, citizenship, and year of immigration. Noncitizens that entered the United States before 1982 are excluded because (a) pre-1982 entrants could have legalized under the Immigration Reform and Control Act of 1986, and (b) those who did not legalize have had 28 years (as of 2010) in which to leave the undocumented resident population.[1]

After selecting noncitizens that entered after 1981, the methodology involves three major steps: (1) applying a series of edits, referred to here as “logical edits,”[2] to identify and remove as many legal residents as possible based on responses in the survey; (2) deriving separate population controls, for 145 countries or areas, for undocumented residents in 2010; and (3) using the population controls (also referred to as ratios) to make final selections of individual respondents in the ACS to be classified as undocumented residents. These procedures yield accurate and detailed estimates of the population each year, and the overall probability of those identified as being undocumented is about 90 percent.

Updating the Ratios to 2016

The rationale for using the same ratio to derive the estimates each year is that the population numbers for 2010, and thus the 2010 ratios are the cumulative product of legal and undocumented entries over the entire 28-year period from 1982 to 2010. If the proportion of undocumented to total entries in a single year, 2011, deviated from that long-term trend, the effect on the overall ratio would likely be very small. Also, the (presumably) minor changes that might occur in the annual ratios in each of the 145 countries or areas would offset each other to some extent, producing fairly stable estimates of the total undocumented population over time.

The justification in the previous paragraph for using the same country-specific ratios from year to year is likely to be valid in the short run. However, in the longer term it is important to have an empirically-based procedure to validate that assumption and to update the ratios — in this case, after five years. For the 2016 estimates, the ratios for 116 countries were revised, as needed, based on estimated change in the legally resident population, using administrative data and estimates of emigration. The validity of the new ratios is strongly supported by the smooth progression of annual estimates from 2010 to 2016 and a detailed analysis of the changes in the ratios relative to increases or decreases in the undocumented population, by country, from 2010 to 2016.

Overall, this exercise has shown that keeping the ratios constant for a few years (in this case for 5 years) introduces very little error into the total estimated undocumented population. The analysis and revisions also show that adequate information is available to make any necessary adjustments. Recalibrating the ratios every five years is especially important for maintaining the accuracy of the estimates for large sending countries in the event their undocumented populations change faster or slower than their legally resident population.

[1] Undocumented residents can leave that population in four ways — they can adjust to legal status, be removed from the United States, leave the United States voluntarily, or, in a small number of cases, die.

[2] The term logical edit refers to the process of determining probable legal status by examining survey data; respondents were assigned to the legal category if they worked in occupations that generally require legal status, had the characteristics of legal temporary migrants, were immediate relatives of US citizens, received public benefits, such as Medicare and (in some cases) Medicaid, were from countries where two-thirds or more arrivals would be refugees, or were age 60 or older at entry.

[3] The ratios are instrumental in deriving estimates for countries, but they also yield estimates of the total undocumented population each year. In fact, no residual methodology of any kind is used to derive CMS’s population estimates in 2011 or in subsequent years.