US-Born Children of Undocumented Residents: Numbers and Characteristics in 2013

The constitutionally guaranteed right to US citizenship to persons born in the United States has received considerable attention in the 2016 Republican presidential campaign. A recent report [1] by the Pew Research Center describes long-term trends in births of US-born children to undocumented residents and it provides a general description of the population. This paper augments the Pew report, providing information about the state of residence of these children, their parents’ area of origin, and selected social and demographic characteristics.

The estimates were derived from data collected in the Census Bureau’s American Community Survey (ACS) [2] in 2013. The Center for Migration Studies (CMS) developed procedures to assign legal status to non-US citizens in the ACS based on responses to the ACS, along with other demographic techniques. The methodology is summarized in the Appendix, and more detailed information on it can be found in other sources.[3]

Before proceeding, it is important to delineate the population being described. With one exception – birthplace of parents in Table 1 – all of the information shown below is for the 5,151,000 US-born children of undocumented residents who resided with their parents in 2013.[4] These “children” ranged in age from under one year to 31 years of age.

It is important to note that significant numbers of other native-born children of undocumented residents live in the United States but are not included in these estimates because: (1) they have moved out of their parents’ households; or, (2) their parents adjusted from undocumented to legal resident status after they were born. No information is available about either of these groups.

Summary of the Data

As Tables 1 and 2 indicate, CMS estimates that: 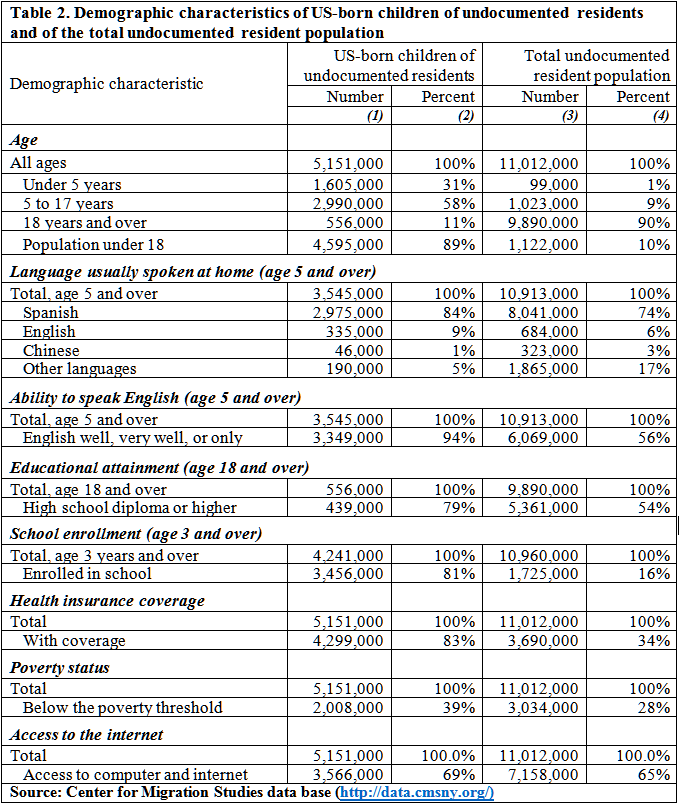 The data presented here create what might be a surprising portrait of the households of undocumented immigrants. About 80 percent of all the children in these households who are under age 18 are US citizens. Although Spanish is usually spoken at home (84 percent), 95 percent of these children speak English well, very well, or only English. Eighty percent of those age three and over are enrolled in school, and 80 percent of those 18 and over have at least a high school diploma. The percent of US-born children of undocumented immigrants who have health insurance (83 percent) is just five percentage points below the total US population.

The findings demonstrate the advantages of legal status. There is a sharp contrast between how well US-born citizen children are doing compared to undocumented parents. There could hardly be a stronger argument for a program to provide legal status to undocumented residents. The parents would surely flourish and integrate more effectively, as their US-citizen children have done, and the nation would be eminently better for it.

The estimates of the US undocumented population – from which these estimates on US-born children of the undocumented derive – are based partly on the reported characteristics of non-US citizens (noncitizens) in the micro data of the ACS. Although this description of the methodology is for 2010, similar methods were used to make estimates for 2011 to 2013.

We assume that nearly all of the undocumented resident population is contained in the ACS data for noncitizens that entered the United States after 1981. Very few who entered before 1982 would still be residing here as unauthorized residents in 2010 because: (1) a large percentage of those who entered before 1982 obtained legal status under the Immigration Reform and Control Act of 1986 (IRCA);[5] and, (2) the remainder have had about 30 years in which to leave the unauthorized resident population – that is, to adjust to legal status, be removed, leave the nation voluntarily, or die.

The methodology involved three major steps: (1) applying a series of edits, referred to here as “logical edits,” [6] to identify as many legal residents as possible based on responses in the survey, (2) deriving separate population controls, for 145 countries or areas, for unauthorized residents counted in the 2010 ACS, and (3) using those population controls to make final selections of individual respondents in the ACS to be classified as unauthorized residents. The technique of controlling the likely unauthorized population to 145 country controls produced estimates by age, year of entry, and state of residence that are very similar to the best available residual estimates.

The next step in the methodology was to adjust the estimates for under-enumeration. The most recent entrants are assumed to have the highest undercount rates (about 12 percent), and the undercount rate drops steadily with length of residence, falling to two percent for those who entered in 1982. The estimated undercount rate for the total population is about 7.5 percent.

[2] The ACS is an annual statistical survey conducted by the Census Bureau. It covers approximately one percent of the total US population. The survey gathers information previously obtained in the decennial census long form. The public-use data from the survey provides detailed social and economic data for all states, as well as all cities, counties, metropolitan areas, and population groups of 100,000 people or more.

[5] The Immigration Reform and Control Act of 1986 (IRCA) went into effect in 1987. Two groups were eligible for legalization, each with their own residency requirements: legalization applicants who continuously resided in the United States  since before January 1, 1982 and Special Agricultural Workers (SAWs) who had 60 days of seasonal agricultural work experience in qualifying crops from May 1985 to May 1986. About 1.6 million legalization applicants and 1.1 million SAW applicants were approved.

[6] The term logical edit refers to the process of determining probable legal status by examining survey data; respondents were assigned to the legal category if they worked in occupations that generally require legal status, were legal temporary migrants, were immediate relatives of US citizens, received public benefits, were from countries where most arrivals would be refugees, or were age 60 or older at entry. This method was developed by Jeffrey Passel and Rebecca Clark (1998), extended by Passel, Bean and Van Hook (2004), and refined by Passel and others in recent years at the Pew Hispanic Center.

[7] Detailed information about undocumented residents, including social and demographic characteristics, for all states and for all PUMAs (areas with 100,000 total population), is available at: http://data.cmsny.org/