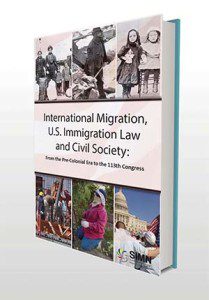 The Scalabrini International Migration Network (SIMN) and the Center for Migration Studies of New York (CMS) announce the release of an important new book on US immigration flows, trends, law and civil society titled International Migration, U.S. Immigration Law and Civil Society: From the Colonial Era to the 113th Congress.  The book was co-edited by Donald Kerwin, CMS’s Executive Director (ED), and Leonir Chiarello, C.S., SIMN’s ED, with substantial support from Breana George, CMS Research Coordinator, and Diego Carambula, SIMN’s former Director of Communications  It is the tenth in a series, coordinated by Fr. Chiarello and produced by SIMN, on international migration to and within the Americas.  Earlier volumes have covered immigration policy and civil society in the Western Hemisphere and in Argentina, Bolivia, Brazil, Chile, Colombia, Mexico, Paraguay and Peru.

The series draws on contributions from leading scholars and practitioners in the field.  Joseph Chamie, the former director of the United Nations Population Division and former editor of the International Migration Review, provides a magisterial overview of migration flows to and within the Americas over the last 525 years, with particular focus on the United States and the territory that became the United States. He also highlights several themes that weave through this long history.  Charles Wheeler, a senior attorney and director of training and legal support for the Catholic Legal Immigration Network, Inc. (CLINIC), provides a concise and timely history of US immigration law and policy, starting in the colonial era and leading to the current impasse on immigration reform.  Sara Campos, a freelance writer and the former director of the Asylum Program for the Lawyers Committee for Civil Rights in San Francisco, writes a groundbreaking chapter on the growing role of civil society in the US immigrant communities and in the US immigration debate.  All three chapters, as well as an introduction by Mr. Kerwin, speak very directly to the US immigration debate.

International Migration, U.S. Immigration Law and Civil Society: From the Colonial Era to the 113th Congress can be ordered for $15 through the SIMN web-site at: http://www.simn-global.org/news_post.php?category=publications&news_id=64. Information on earlier volumes in this series can be obtained by emailing [email protected].  SIMN and CMS will also soon be announcing a series of roll-out events for the book that are focused on the current impasse on immigration reform.