CMS publishes speeches, talks and other presentations in order to provide a platform for scholars, policymakers, civil society leaders and migrants to share their ideas, findings and personal reflections. CMS speeches enliven the study and analysis of international migration through the lens of multiple disciplines, competencies and actors.

Donald Kerwin spoke about CMS’s Democratizing Data initiative at the 2022 International Migration Review Forum, which addresses the GCM’s Objective 1 to produce “accurate and disaggregated data as a basis for evidence-based policies.”

On December 7, the Center for Migration Studies of New York (CMS) hosted the 2021 Fr. Lydio F. Tomasi, C.S. Lecture on International Migration. Silas W. Allard delivered the lecture, “Christianity and the Law of Migration: A Dialogue in Social Responsibility.” The event also featured responses from Kristin Heyer and Raj Nadella – co-editors with Allard – of the new book Christianity and the Law of Migration (Routledge 2021).

On March 12, 2019, Most Reverend Oscar Cantú, Bishop of San Jose, delivered the welcoming keynote at the 2019 Catholic Immigrant Integration Initiative Conference at Santa Clara Law School in Santa Clara, California. In his remarks, Bishop Cantú considers how the Church has and can deploy its limited resources and implement successful models of integration to better address immigration and better welcome immigrants.

On March 13, 2019, Most Rev. Salvatore J. Cordileone, Archbishop of San Francisco, delivered a keynote address at the 2019 Catholic Immigrant Integration Initiative Conference at Santa Clara Law School in Santa Clara, California. In his remarks, Archbishop Cordileone discusses: the Catholic Church’s concern for men, women, and children “on the move”; common themes found throughout the Church’s pastoral vision and the conference goals; immigrant contributions; how changing US immigration and refugee polices are affecting Catholic institutions and integration efforts; and promising and successful programs and ministries with immigrants.

The Most Reverend John Stowe, OFM Conv., Bishop of Lexington, addressed the CMS conference "Promoting Just and Inclusive Communities in Ohio, Kentucky, and Indiana: A “Whole of Community” Approach to Immigrants and Refugees" in Cincinnati, Ohio from July 16-18, 2018. Bp. Stowe addressed the cruel enforcement actions against immigrants and refugees, the need for comprehensive immigration reform, and the work of local and regional groups to protect and care for the vulnerable populations impacted by harsh government policies....

Donald Kerwin, CMS's Executive Director, presented this address at the Seminar on Migration and Religion at Radboud University Nijmegen, The Netherlands held on February 9 and 10, 2017....

The Most Reverend Nicholas DiMarzio, Bishop of Brooklyn, addressed the SIMN VI International Forum on Migration and Peace in Rome, Italy from February 20-22, 2017. Bishop DiMarzio spoke national engagement on the panel, “Mapping the Migration Activities of Catholic Organizations.”...

Remarks by Most Reverend Robert W. McElroy, Bishop of San Diego, on November 28, 2016 at the fourth national gathering of the Catholic Immigrant Integration Initiative in San Diego, California....

We’re about to commemorate another World Refugee Day. While we all hope for peace, millions languish and remain on the move: 263,000 Burundi refugees, 987,000 refugees and IDPs [internally displaced persons] fleeing violence in Central African Republic, and then more than twice as many from the Democratic Republic of the......

The due process clause is one of America’s great inspirations, one of its better angels. Indeed, the clause’s birth in 1868 — over presidential veto by Andrew Johnson and conjoined with the equal protection and birthright citizenship provisions — firmly rooted it at the center of the American legal experience......

Allow me first to thank the co-organizers of this important event – the National Partnership for New Americans and the New York Immigration Coalition – for bringing us together and for their important work on these issues over so many years.  Thanks as well to the event’s executive committee, to its sponsors...... 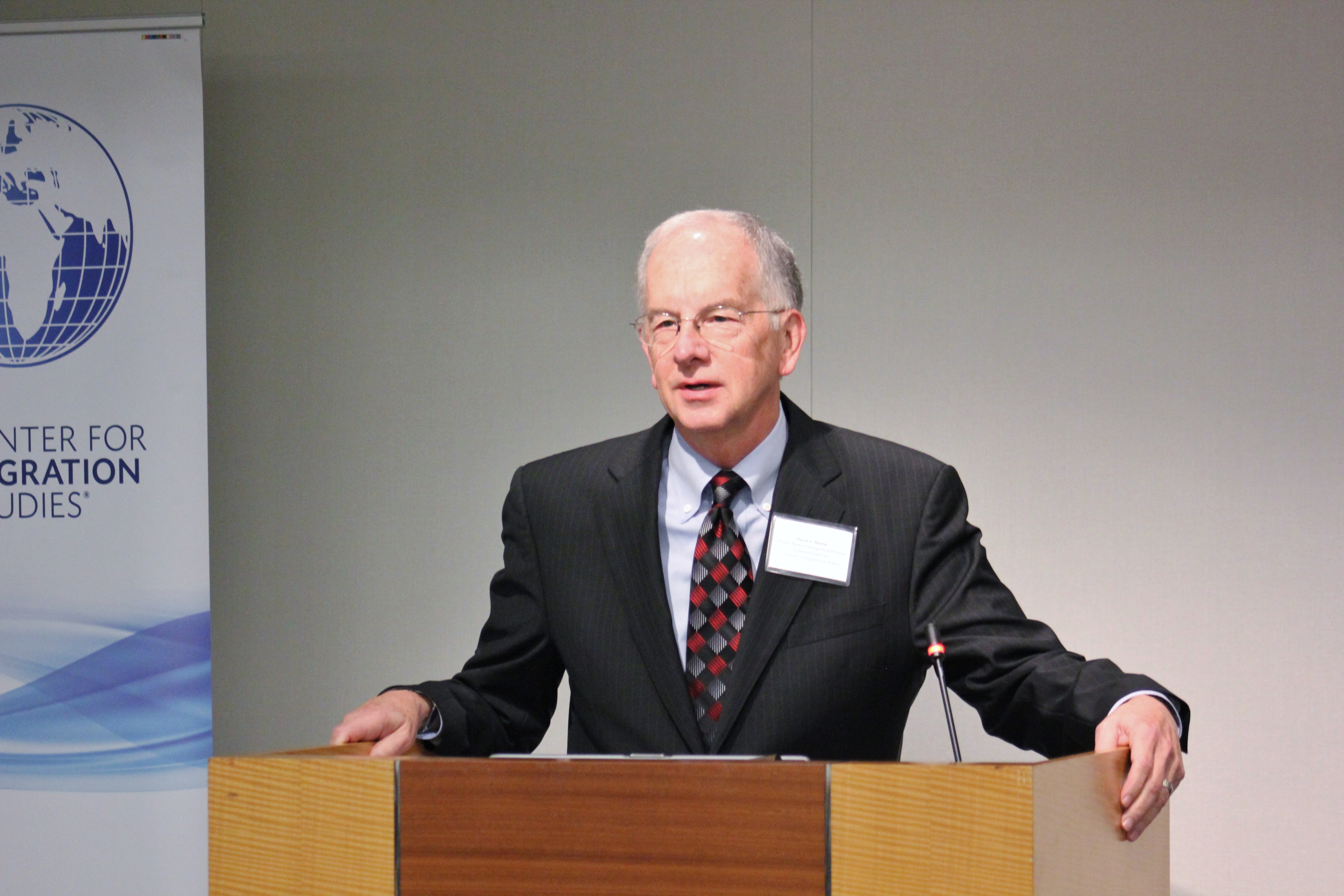 I’m going to talk today more about prudence than about law.  In part is this because I am discouraged about the current refugee situation – not despairing, but leaning pessimistic, which is uncharacteristic for me.  The world is more dangerous, governance structures are weakening, conflict is more widespread and vicious,......

Address delivered at the 5th International Forum on Migration and Peace in Berlin, Germany....

Donald Kerwin, Executive Director for the Center for Migration Studies of New York (CMS), delivered this address at a joint conference entitled, "Mainstreaming Migration into Development Planning: Assessing the Evidence, Continuing the Dialogue," co-hosted by CMS and the International Organization for Migration (IOM), in partnership with the United Nations Development Program (UNDP) and the Swiss Agency for Development and Cooperation (SDC). ...