The Department of Homeland Security (DHS) faces a November 23, 2017, deadline to determine whether to extend Temporary Protected Status (TPS) to Haiti, first granted following a devastating earthquake in that country in January 2010. Haiti was extended for six months in May, when then DHS Secretary John Kelly indicated that Haitians should use the time to look for other forms of immigration relief or prepare to leave the country. Kelly also said that Haiti should prepare for the return and re-integration of their nationals, presumably after the end of the six-month extension, which is January 22, 2018.

Since that time, Hurricanes Irma and Maria have damaged portions of the country, flooding towns and cities and destroying crops and farms. This follows a direct hit from Hurricane Matthew in 2016, which devastated the southern part of the country, destroyed 300,000 homes and killed more than 800 people. To add to the instability, Haiti still suffers from a cholera outbreak which began in 2010, with 10,000 new cases reported as of September 2017. For these reasons, the government of Haiti – the poorest nation in the hemisphere – has requested another extension of TPS, in order to make more progress on the restoration and recovery of the country.

Terminating TPS for Haiti would not be in the best interests of Haiti, the United States, or the Caribbean region, as it would stretch the limits of the country to re-integrate more than 50,000 persons while it is struggling to maintain basic services for its current population. It also would significantly reduce the amount of remittances sent back to the nation to help in the nation’s recovery – an estimated $2.3 billion.

Moreover, the more than 50,000 Haitians protected under TPS are deeply imbedded in US society. According to a recent study by the Center for Migration Studies (CMS), the average length of residence in the United States for the affected population is 13 years. They have 27,000 US-citizen children, while 81 percent of them are employed and 6,200 have a mortgage. The majority live in Florida (32,500), New York (5,200), New Jersey (3,400), and Massachusetts (2,700), as shown below.

Deporting them back to Haiti would separate them from their families and harm some of the industries and companies in which they work – construction, landscaping, child-care, not to mention corporations like Disney.

There remains the question of whether the forthcoming decision by DHS will be influenced by political ideology rather than the facts on the ground and the best interests of both nations. According to media reports, Acting DHS Secretary Elaine Duke was pressured by now White House Chief of Staff John Kelly to “expel” Hondurans who were recently extended six months because of a lack of full information about country conditions. A termination of TPS for Haiti now would be met with skepticism that the decision also was influenced by political considerations.

For decades, the United States has imposed strict immigration policies against Haitians, both at land and at sea. The extension of TPS to Haiti in 2010 was the proper policy, and subsequent natural disasters, including two recent storms, warrant its continuation of at least 18 months and beyond, until such time as Haiti is ready to stand on its feet again, and TPS recipients can be safely and productively re-integrated into their nation’s life.

CMS also announces a new data table (Table 2 below) showing Haitian TPS beneficiaries by state and area of residence. This table reveals the numerous local areas where TPS beneficiaries are contributing to their communities and establishing deep roots. All tables below, along with additional tables on TPS recipients from El Salvador and Honduras, can be found at: https://cmsny.org/tpstablesbystate/. 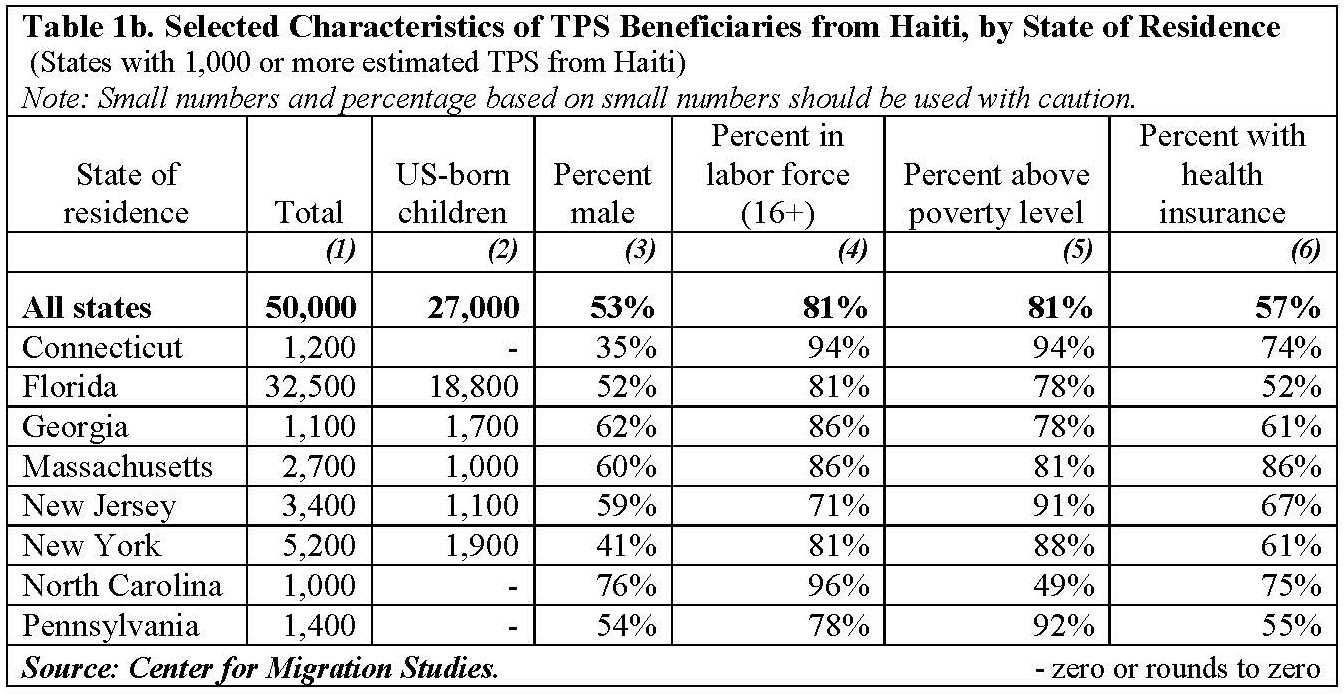 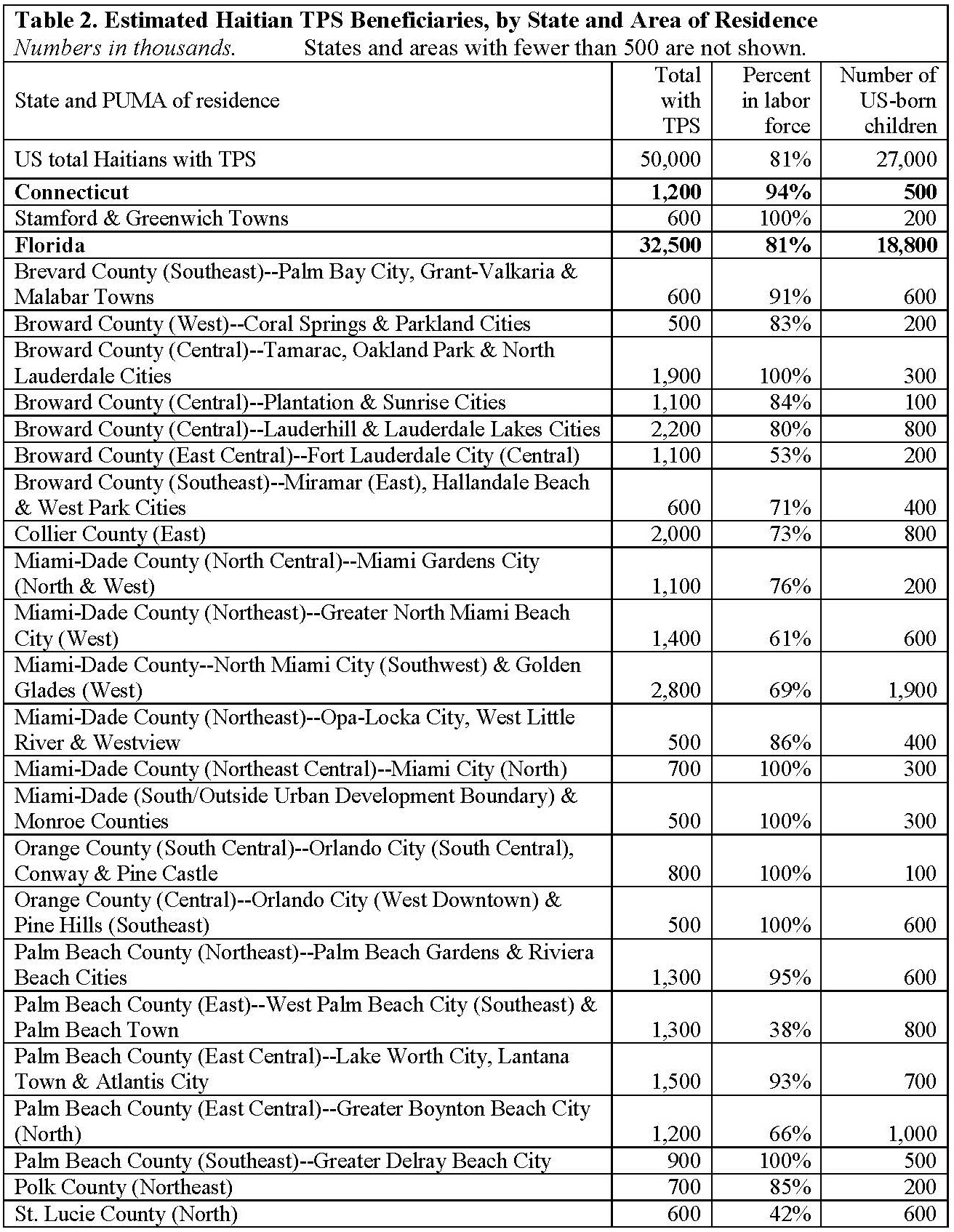 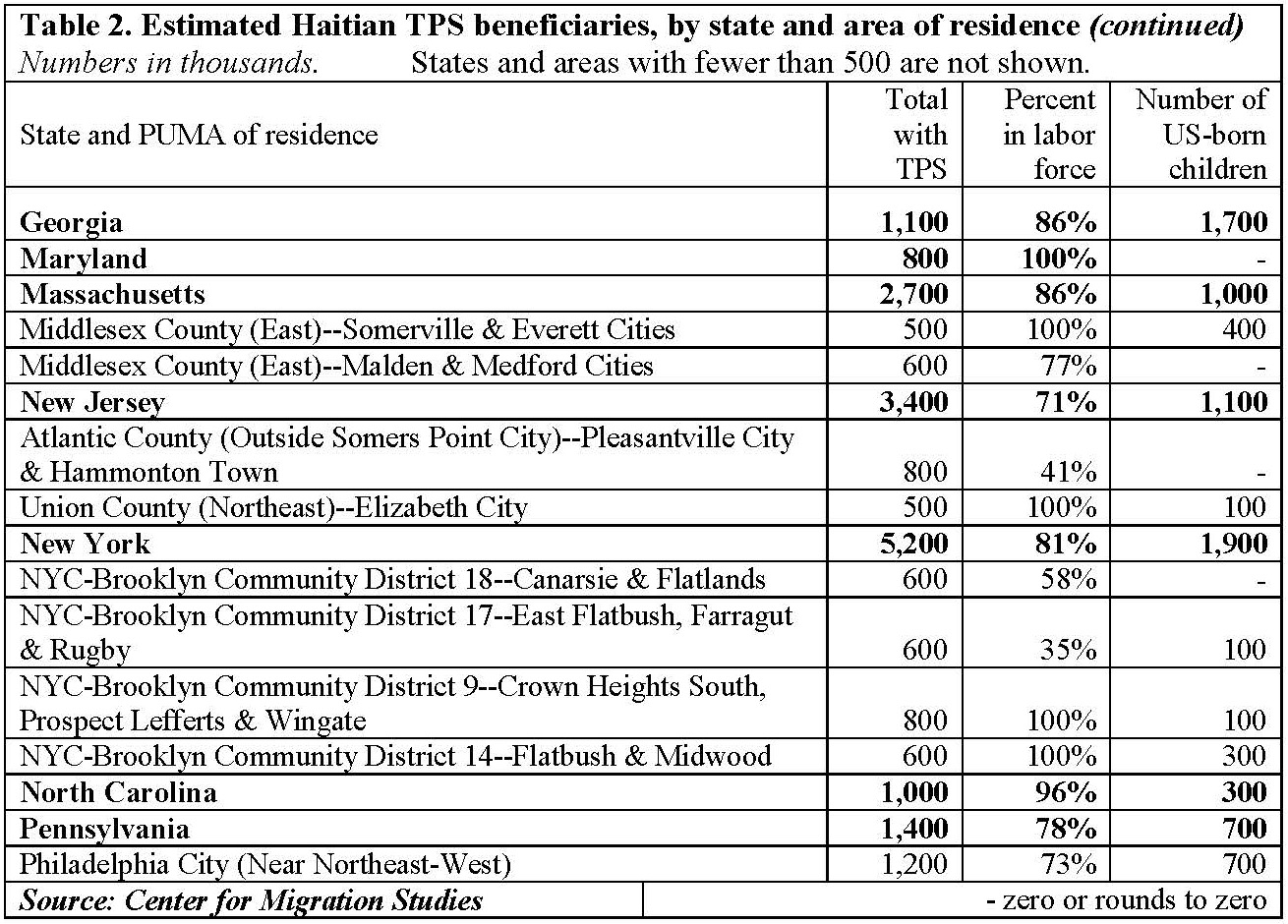 This report presents detailed statistical information on the US Temporary Protected Status (TPS) populations from El Salvador, Honduras, and Haiti. It reveals hardworking populations with strong family and other ties to the United States. In addition, high percentages have lived in the United States for 20 years or more, arrived as children, and have US citizen children. ...

This paper examines the legal parameters of Temporary Protected Status (TPS) in the United States and traces the program’s legislative history, exploring the congressional intent behind its creation. It argues that TPS has mostly been used as a tool to provide long-term protection, which runs contrary to congressional intent in establishing the program and has placed TPS recipients in a “legal limbo” in which they are unable to fully integrate into the United States. The paper discusses administrative and legislative remedies that would attempt to realign the TPS program with the goal of providing temporary protection to individuals fleeing crisis situations, as well as uphold the US tradition of integrating long-term immigrants....