CMS estimates that 275,000 Venezuelans could benefit

On March 8, US Department of Homeland Security Secretary Alejandro Majorkas announced that he is designating Venezuela for Temporary Protected Status (TPS) for an 18-month period, until September 2022. 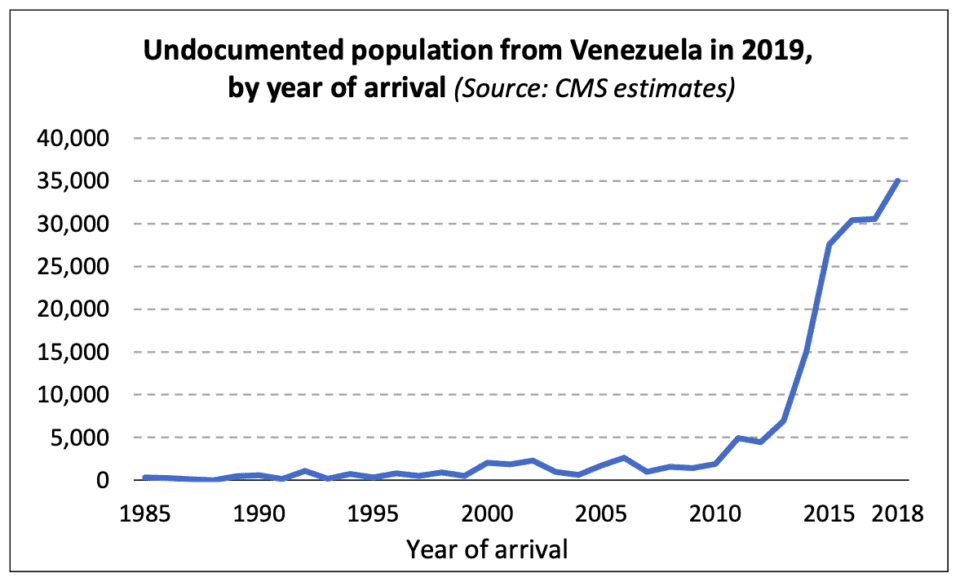 As the above graph shows, the vast majority of undocumented Venezuelans have arrived in the United States since the onset of the socioeconomic and political crisis in Venezuela. Since 2014, there has been an 8,000 percent increase in the number of Venezuelans seeking refugee status worldwide, according to the United Nations High Commissioner for Refugees (UNHCR).  The DHS Secretary can make a TPS designation based on conditions in a country that make it unsafe for their nationals to return, including armed conflict, environmental disaster, and other extraordinary and temporary conditions. “The living conditions in Venezuela reveal a country in turmoil, unable to protect its own citizens,” said Secretary Mayorkas. “It is in times of extraordinary and temporary circumstances like these that the United States steps forward to support eligible Venezuelan nationals already present here, while their home country seeks to right itself out of the current crises.”

Venezuelans who qualify for TPS have 180 days to apply for this status, which provides protection from deportation and work authorization.  To qualify, Venezuelans must be able to demonstrate continuous residence in the United States since March 8, 2021.

CMS has produced and published extensive work on Venezuelan migrants and refugees, and on the TPS program, including:

[1] CMS includes Venezuelan asylum-seekers in this estimate, although they are not “undocumented.”